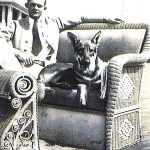 Rolling chairs were a familiar sight in Ocean City in 1920s and 1930s and were an early version of today’s Boardwalk tram. Many college students helped pay their tuition by pushing tourists up and down the Boardwalk in those wicker chairs on wheels.

Rolling chairs originated in Atlantic City, N.J. and quickly made their way south. Dr. Francis Townsend, Sr. introduced them to Ocean City where he rented them for 25 cents an hour from his Washington Pharmacy on the Boardwalk at Somerset Street.

Although gone from the resort scene since the World War II era, these chairs on wheels were a big attraction for several decades. A restored rolling chair is on display at the Ocean City Life-Saving Station Museum.

To purchase one of Bunk Mann’s books, click over to www.vanishingoc.com.