OCEAN CITY – Three years and more than 3,000 miles later, a message in a bottle has connected a local boy with new friends in Ireland.

Ocean City resident Sasha Yonyak, 14, was contacted this week by a couple in northwestern Ireland after they found a message in a bottle he wrote in 2019.

“I’ve made some new friends in Ireland,” Yonyak said. “It’s like a treasure washing up.” 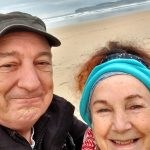 Belfast residents Rita Simmonds and Ciaran Marron were walking on the beach in Donegal last week when they stumbled upon a glass bottle. Upon noticing it contained a note and two U.S. one-dollar bills, they took it home and let it dry by their fireplace overnight. When they carefully spread open the yellowed piece of paper after removing it from the bottle, they found a 2019 note from an 11-year-old Ocean City boy. The letter described his hobbies as well as his friends and family and asks the finder to call him. “He did such a good job sealing it thoughtfully with clingfilm and what looks like glue,” Simmonds said. “One day hopefully we can meet him in Donegal and show him the beach it landed on.”

Though the number Yonyak listed on the note had been disconnected, Simmonds and Marron, who have a 14-year-old grandson of their own, were able to find Yonyak’s father on Facebook and connected with the family this week. Simmonds said they’d been determined to find him to let him know the bottle had finally reached shore.

“All our friends and family want to know the kid who threw the bottle in the ocean,” Simmonds said. “He’s already a celebrity here.” 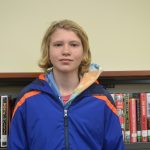 Yonyak said this week he’d forgotten all about the bottle until hearing from Simmonds and Marron. The news that it had been found brought back fond memories for him, however. He spent years fishing with good friend and neighbor Wayne Smith. Leaving a marina one day, they found a bottle in the water with two one-dollar bills and a note that encourage the finder to “pass it on.” Because the note indicated the bottle had only been put into the water in Ocean City, Smith and Yonyak decided to go a step further. On their next fishing trip, they put a note from Yonyak in the bottle — the same one they’d picked up — with the two one-dollar bills and dropped it in the ocean a mile offshore.

“We talked about how it might go into the Gulf Stream but we didn’t know where it’d end up because of the currents,” Yonyak said.

Smith, 64, passed away in August. Vlad Yonyak, Sasha’s father, said recounting the story behind the message in the bottle gave his son a chance to remember all of the good times he had fishing with Smith.

“There’s not many friendships like that,” Vlad Yonyak said. “Two people, very different, but they find something and have such a good time.”

He said everyone was surprised to learn the bottle had ended up all the way in Ireland, more than 3,200 miles away. 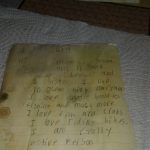 The handwritten message found in the bottle is pictured.

“The bottle, it floated through the friendship of Sasha and Wayne,” he said.