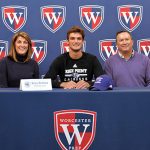 next level next year.

Last Monday, Worcester Prep senior Brice Richins signed a letter of intent to play lacrosse and continue his academic career next year at High Point University in North Carolina. High Point is a NCAA Division I school that competes in the Southern Conference. Last season, High Point reached the NCAA Division I lacrosse tournament before bowing out against Duke.

Richins excels on the lacrosse field at Worcester, but also played varsity soccer and basketball. He was named Eastern Shore Independent Athletic Conference Player of the Year after the fall soccer season. In addition to his exploits on the playing fields at Worcester, Richins is an excellent student. He holds a spot on the WPS Head of School List in his upper school years and is a member of the Charles R. Jenkins Chapter National Honor Society, the Spanish National Honor Society and the National Art Honor Society. 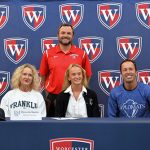 Worcester Prep varsity lacrosse standout Myranda Beebe also last week signed a national letter of intent to continue her athletic and academic career at Franklin and Marshall College in Pennsylvania. Franklin and Marshall competes in the Division III Centennial Conference and went undefeated last season on its way to another NCAA tournament appearance.

Like Richins, Beebe also excelled at varsity soccer and basketball at Worcester. She was named Worcester Prep’s Most Valuable Player for girls’ varsity lacrosse after another remarkable season last year.