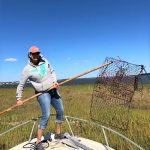 An abandoned crab pot and small boat were among the finds during last week’s annual debris cleanup. Submitted Photos

While participation was much less than last year, MCBP Outreach and Marketing Coordinator Sandi Smith said attendees were still able to collect more than one ton of trash, including a dilapidated dingy and a paddle boat.

“We were a little disappointed in the participation, but there was a lot going on that weekend,” she said. “But with that being said, the teams that collected the most amount of trash last year came back this year and didn’t disappoint.”

In 2020, MCBP – in partnership with Blue Water Development and Pure Lure Reel Fishing Gear – hosted its first annual Marine Debris Plunder, a day-long event that engages the community in picking up debris found in the waterways and streets and bringing it to one location to be weighed and disposed of properly.

Traveling by both land and sea, Smith said the majority of this year’s participants covered the areas of the St. Martins River and Cape Isle of Wight Bay. 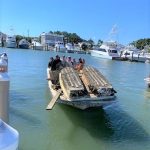 “This cleanup is focused on abandoned crab pots, so the most common debris collected were crab pots,” she said. “MCBP has recently received funding to engage the community on a marine debris outreach program to garner more support on educating the community on the perils of abandoned pots and create a process for the community to collect and dispose debris.”

Because of this year’s reduced participation, several Marine Debris Plunder participants will now be part of a committee to create a bigger and better event in 2022. Smith said those interested in joining the group can contact sandis@mdcoastalbays.org or call 410-213-2297 ext. 106.