BERLIN – Plans for a mural honoring the Rev. Dr. Charles Albert Tindley are going back to the drawing board following input from a local board.

Members of the Berlin Historic District Commission (HDC) voiced concerns this week with a mural of Tindley, the gospel music icon born in Berlin, planned for the Parker building on William Street. They’re worried about maintaining the town’s historic appearance.

“It is so unique,” HDC member Mary Moore said. “I feel strongly about keeping the Victorian character.”

Ivy Wells, the town’s economic and community development director, has spent months working with various stakeholders regarding the concept of a Tindley mural. Though there were initially plans for artist Jay Coleman to paint the mural, which was to be funded with a grant, on the side of the Bruder Hill building, the bricks there weren’t the right texture. Instead, Wells presented plans Wednesday for the mural to be installed on the side of the old Farlow’s Pharmacy space on the building owned by J.E. Parker.

Though she wasn’t present, HDC member Laura Stearns submitted written comments expressing her objections to the mural. She thought Tindley should be recognized in a more fitting manner, like a statue.

“He should be recognized in the town where he was born,” Stearns wrote. “Because our town is Victorian he should be commemorated in a way that is historically appropriate. This mural does not belong in the historic district painted on brick that has not been touched with paint in hundreds of years.”

“My first thought when I looked at the packet, Disney World came to my mind,” she said. “It was very commercial looking.”

“I’m not a big fan of covering up bricks,” he said. 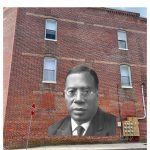 This rendering of the proposed mural was presented as a mock up for size purposes only.

Commission member John Holloway said he was worried about upkeep and the potential for vandalism.

“The statue is a fantastic idea,” he said.

HDC member Robert Poli said he wasn’t ready to see a mural on the building, particularly since he was accustomed to New York, where there were murals all over the place.

“Some of it’s nice but some of it takes away from the architectural value of these old buildings,” he said.

Carol Rose, HDC chair, encouraged the commission to consider a continuance rather than voting not to approve the mural. If the mural request was formally voted down by the board, the proposal wouldn’t be able to come back for a year. 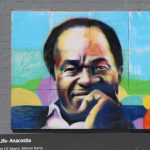 A mural example of Jay Coleman’s work is pictured.

The board agreed and voted unanimously to continue the hearing in order to consider alternative methods to honor Tindley.

The Berlin Historic District Commission (HDC) approved a sidewalk mural to improve the appearance of a downtown alley.

The HDC on Wednesday approved a sidewalk mural for the alley between the Purnell Building and Island Creamery. The mural is meant to beautify the alley and celebrate the fact that Berlin is a designated “Bee City.” HDC members were excited about the potential for improving the appearance of the narrow alley.

Ivy Wells, the town’s economic and community development director, said that on her walks through town she’d noticed the unsightly condition of the alley, which is strewn with cigarette butts and wet from dripping overheard air conditioning units.

Wells got the idea for a sidewalk mural from an art museum she visited in Solomon’s Island. She told the commission local artist Jess Hall would paint a “Pollinator Way” mural on the sidewalk celebrating bees, in a nod to Berlin’s Bee City status, and that rain gardens would be installed underneath the air conditioning units.

“It would be easy to maintain if they were troughs,” said Georgianna McElroy.

McElroy said the group she had helped start, the Berlin Ecumenical Green Team, was hoping to do similar planters in some other spots in town where downspouts created wet sidewalks. 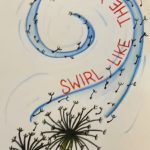 A design for a portion of a sidewalk mural is pictured.

Commission members spoke in support of the project.

“Anything that can make that area look better than it does is a great improvement,” commission member John Holloway said.

Rose agreed but said she wanted to make sure the rain gardens were maintained.

“It’s a wonderful idea,” she said. “I really like it but if it’s just going to be another mess I’m not for it.”

With McElroy’s assurance that the rain gardens would be maintained, the commission voted unanimously to approve the project as presented.

The HDC also approved a small pedestrian mural Hall will paint outside the Berlin Welcome Center. The mural, which will depict a brick walkway, will be painted on the ground on the north side of the building, where “no parking” is painted on the asphalt. Wells said that currently, when visitors stopped to get a picture in front of the mural on the welcome center’s wall, the “no parking” lettering intruded.

“It’s not very pretty,” she said. “We’re trying to turn that into more of a welcoming area.”