OCEAN CITY — The public got a first look at the alternatives for the redevelopment of the Baltimore Avenue corridor with an open workshop last Thursday.

In recent years, a major renovation of the streetscape along the Baltimore Avenue corridor from North Division Street to 15th Street including undergrounding the utilities and widening the sidewalks, has been on the town’s radar, but the issue is complicated. During a public workshop last Thursday evening, City Engineer Terry McGean laid out the alternatives, where the city was in the process, what the next steps are and what will happen with an unused portion of the existing right-of-way along the corridor that has steadily been encroached upon over the decades.

McGean’s presentation was brief and there were also renderings of what the two alternatives could look like. After his formal presentation, those in attendance reviewed the renderings and were able to ask questions of McGean, Public Works Director Hal Adkins and the design consultant in an informal setting and not in an open forum.

“I’m going to be the city’s primary contact point during the design phase,” he said. “My goal is to spend very little time up here and as much times as possible out there with you all. My goal is to talk with you and not at you.”

McGean explained the conceptual plan for the redevelopment of the Baltimore Avenue corridor from North Division to 15th Street. He explained the rest of the corridor had been redeveloped in recent years.

“We’re going to underground utilities and widen sidewalks,” he said. “In the broadest terms, that’s what we’re here for tonight. That will underground all of the remaining utilities on Baltimore Avenue. In years past, we’ve already done from the Inlet to North Division and from 15th Street to 33rd Street.”

Complicating the issue further is the existence of a long forgotten and underutilized right-of-way along the Baltimore Avenue corridor. Baltimore Avenue is unique in a variety of ways. For example, the original deeds show the right-of-way as 75 feet wide, but the current roadway only utilizes about 45 feet from curb to curb.

A review of the ancient deeds for Baltimore Avenue reveal a no man’s land of about 32 feet in some areas that could ultimately be deeded back to the property owners along the corridor or used to widen the roadway and its sidewalks. Over the decades, however, private property is steadily encroached on the original right-of-way platted over a century ago. For example, in some cases, private businesses along the corridor have signs in the old right-of-way, while others have parking areas. In some cases, the long-forgotten right-of-way is just covered with grass or landscaping and isn’t necessarily utilized by the private sector. 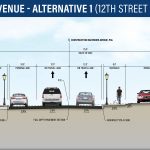 Alternatives for Baltimore Avenue’s reconstruction are pictured and largely differ on the size of the right-of-way on the east side of the roadway. Submitted Photo

Alternative one calls for widening the sidewalks from the existing five feet to eight feet on both sides of the street. It would about eight- to nine-feet of the unimproved right-of-way and leave 22-23-feet that could be deeded back to the adjacent property owner. The advantages to Alternative 1 is it would come in at a lower cost, there would be less impact on the unimproved right-of-way, and there would be lower maintenance. The disadvantages would be limited or no landscaping, and the new eight-foot sidewalks would be obstructed by signs and lights.

Alternative two includes roughly the same travel lanes with eight-foot sidewalks, but would also include a two-foot to five-foot easement in which to place street signs and landscaping including trees. That alternative would use 12-18-feet of the unimproved right-of-way, leaving 13-19 feet unencumbered. The advantage to that alternative would be plenty of room for landscaping and unobstructed eight-foot sidewalks on both sides. The disadvantages are it would likely cost more and there would be more impact on the unimproved right-of-way. McGean explained the so-called unimproved right-of-way that exists on the east side of the corridor that has been used informally by property owners for decades.

McGean said once a final design is approved, the remaining portion of the unimproved right-of-way will be deeded back to the adjacent property owner.

“Under either alternative, the remaining unimproved right-of-way will be relinquished to the adjacent property owner,” he said. “The use of the property will be restricted by existing zoning and building regulations, with possible easements for utility equipment or existing water and sewer lines.”

McGean said the cost of transferring the unused portion of the unimproved right-of-way would be built into the cost of the estimated $20 million project and would not cost the property owners anything.

“The cost of transferring the right-of-way, including legal fees and survey work, for example, will be paid by the city,” he said. “The cost to relocate signs, fences and landscaping, or reconfiguring the parking, will also be paid for by the city.”

McGean said the portion of the unimproved right-of-way deeded over to the property owners could be used in several ways.

The total redevelopment of the Baltimore Avenue would take place over the course of two off-seasons, tentatively starting in the fall of 2022. The first phase would include the undergrounding of the utilities. The second phase would include widening the sidewalks, lights, landscaping and paving. During those off-season phases, traffic would be detoured as needed. 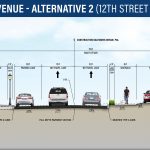 McGean explained the next steps in the process was reviewing written and verbal comments, presenting the alternatives to the Mayor and Council, refining the final design and sending notifications to property owners along the corridor whose property could be affected by the project, or whose portion of the unimproved right-of-way would be used.

“We’ll send written notification to every single property owner that’s going to be affected with the expansion into the right-of-way with a drawing showing you exactly what it’s going to look like on your property,” he said. “At that time, you will do one of two things. You’ll either say we’re good to go and we like what you’re doing, or hey, we have an issue with this. We’ll be happy to come out to the site to see what we can do differently if that’s what has to happen.”