OCEAN CITY – It was “Nothin’ But A Good Time” for one local teenager, who had an opportunity to play the guitar alongside artist Bret Michaels during OC BikeFest’s headline performance.

Last Friday, 14-year-old Gavin Brink took the stage with Michaels and his bandmates to show off his guitar skills in a six-minute performance of “Nothin’ But a Good Time.” In an interview this week, the Ocean City area resident said the opportunity was an experience of a lifetime.

“I was so excited I almost started crying,” he said. “There was a lot of emotion in that moment.”

While he had always messed around with his father’s guitar, Gavin said he had no interest in learning to play the instrument until he was 10 years old.

“I was sort of tricked into it …,” he joked. “It was Christmas, and I didn’t know what to get my mom for a Christmas present. My dad said why not learn to play a song for her on the ukulele. That’s what I did, and I never stopped.” 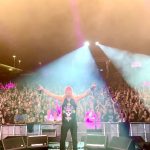 Gavin said his music style is heavily influenced by hard rock and metal artists such as the late Eddie Van Halen and Steel Panther guitarist Satchel, with whom he has cultivated a professional relationship. Earlier this month, for example, the up-and-coming musician joined Steel Panther for a performance at the Bottle & Cork concert venue.

“That was in front of 1,100 people and it was way more than I could’ve ever imagined,” he said.

But his biggest gig to date came last Friday, when Gavin was invited to play alongside Michaels in an OC BikeFest headliner.

“The nervousness didn’t hit me until Bret started announcing me …,” he said. “That’s when it hit me that I was about to play for 18,000 people.”

Gavin said he first met Michaels in June, when the artist and his music producer, Pete Evick, stopped by his father’s restaurant, Ocean 13.

“My dad has known Pete Evick for years,” he explained. “He was in the area and decided to come up to Ocean 13 and see the new restaurant. We went there and got an opportunity to meet Bret, since he was with him.” 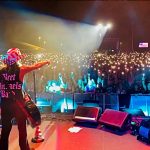 Gavin said Michaels was so impressed after seeing his guitar skills that he was invited to join the artist at OC BikeFest.

He noted Gavin’s Sept. 17 performance with Michaels marked only his eighth on-stage performance. His seventh came earlier in the day, when he joined artist Jared James Nichols at OC BikeFest’s Ocean Stage.

“We look forward to getting him on more stages,” Jeremy said. “We fully support everything that helps him make his dream come true.”

Gavin said he is now looking to start a band with others his age and pursue a music career.

“I’m pretty much hoping to become a rock star,” he said.