The Berlin Town Council last Monday voted unanimously to approve a budget transfer of $45,000 that will allow the town to purchase a lot on Flower Street. Ideally the lot, paired with the multi-purpose building property, will eventually become the site of a long-awaited community center.

“There’s a lot of history here at this location and what you’re seeing this evening is part of several pieces of a puzzle that’ll hopefully all come together nicely,” Mayor Zack Tyndall said.

Tyndall said the council recently held closed session meetings regarding the roughly half-acre lot on Flower Street, which was listed for sale earlier this year for $33,500. Back in 2019, the Berlin Community Improvement Association (BCIA), which owns the adjacent property containing the multi-purpose building and the Berlin Head Start facility, expressed interest in donating the site of the former Flower Street School to the town. The discussion came to a halt, however, when it was determined a roughly half-acre lot in front of the multi-purpose building and head start belonged to another entity, Booker T. Washington Lodge.

Tyndall said the town hoped to acquire the lodge’s property, using funds that have been set aside in the town’s community center reserve, and then resume talks with the BCIA.

“The council has acted to try and acquire that property and keep that property intact as an entire unit,” Tyndall said. “There’s history with that site dating back well over 100 years.”

Tyndall believes that history makes the property the ideal site for a community center. Others in the community feel the same way. 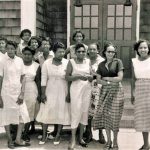 “I am super excited about the purchase of the property and the likelihood of there being a community center on the site of the Flower Street School for a couple different reasons,” Councilwoman Shaneka Nichols said. “Not just due to the historical aspect of it but also proximity. The children of the community, and everyone in the town, could truly use a community center but having it within walking distance of such a large population of people that could utilize the community center — and that would —  on a regular basis is phenomenal.”

She added that much of the town’s school bus traffic already traveled along Flower Street, which would allow the location to serve kids who didn’t live within walking distance.

“The possibilities are endless with that location and the connections through different community organizations,” she said.

Berlin resident Patrick Henry, a well-known regional artist, has been talking about those possibilities for months. Earlier this summer he drew a sketch — using the Rosenwald School design as an inspiration — of what a community center on the site could look like. The three-wing building could include an event area with a kitchen, an educational resource center and a recreation wing. Henry, who has been compiling local historical information for some time, would also like to see a small museum space included. He attended Flower Street School and wants to see it remembered and its history preserved.

“People have been influenced by Flower Street School for generations,” he said. “They’re willing to contribute what they can to see this come to fruition.”

A social media post Henry made in June regarding the need for a community center to replace the multi-purpose building spurred heated discussion on the topic among residents and elected officials.

“In hindsight I’ve realized the spirits of my mother and father were talking to me,” he said.

His parents both had involvement with the property, as his mother worked at head start and his father’s name was listed on the transfer when the half-acre lot now being purchased by the town was sold to the lodge. Even once the Flower Street School closed, Henry said the overall property remained an important piece of the community, as countless events were held at the multi-purpose building. There were dances at the building most weekends as well as banquets and social events.

“My youngest brother had his wedding reception there,” Henry recalled.

The building, however, has aged and deteriorated significantly during the last 20 years. Though there were talks with elected officials about replacing the building as early as 2001, nothing has happened yet.

“To see it deteriorate to the point that it has is sad,” Henry said. “We talk of Berlin being an exceptional town, America’s coolest small town. It was for me sad to see this building a representation of the community.”

He added that while Flower Street School had served African American kids, the neighborhood surrounding it had grown.

“Yes, Flower Street was a majority African American community but if someone was to take a look now it’s become a diverse, modern neighborhood,” he said.

Though the council’s approval of the budget amendment is just a small step toward the possibility of a community center where the Flower Street School once stood, Henry is optimistic that action is finally being taken.

“Prayerfully the powers that be can collaborate,” he said. “It’ll be fraught with discussion and questions, but I just think how beautiful it would be the day of that groundbreaking.”