OCEAN CITY — Despite some misgivings about the price tags on some of the capital projects included, resort officials this week approved on first reading a future bond sale totaling nearly $49 million.

The Mayor and Council had before them on Tuesday the first reading of an ordinance authorizing the sale of general obligation municipal bonds totaling nearly $49 million. The bond sale includes multiple capital projects, including funding for the downtown recreation complex redevelopment, the relocation of the existing firehouse at 74th Street to a new location in front of the Public Safety Building at 65th Street, the next phase of the Baltimore Avenue corridor redevelopment among others.

Also included in the proposed bond sale is the refinancing of bonds issued in 2012 at around $20 million. By taking advantage of historically low interest rates, that $20 million still on the books since 2012 can be refinanced through the currently proposed bond sale, resulting in a savings of nearly $1 million.

Last week, the Mayor and Council got a first look at the design for the new Ocean City Fire Department firehouse and were taken aback by the estimated $11.2 million price tag. When the new firehouse was discussed last spring, the cost estimate was around $5.5 million, of which $1.5 million was expected to be the contribution from the volunteer fire company from proceeds from the sale of the existing firehouse at 74th Street.

Because the estimated cost of the firehouse had escalated, and because the proposed design included a new Station 3 firehouse over two times the size of what was anticipated, the Mayor and Council sent City Engineer Terry McGean, Fire Chief Richie Bowers and fire department staff back to the drawing board to come back with a design closer to the original estimate.

“We heard the marching orders loud and clear,” said McGean on Tuesday. “My understanding is it will come back to you. Any savings from the firehouse can be applied to the Baltimore Avenue project. The cost of the fire station was estimated at $5.5 million, but it went up substantially. It’s not going to cost that much.”

Nonetheless, the new Station 3 firehouse was still listed in the current potential bond sale at the $11.2 million estimate. Last week, it was discussed at length that the town had no intention of building an $11.2 million firehouse when the original estimate was $5.5 million, but that $11.2 million would be included in the bond sale and any reduction in the cost of building the new fire station could be applied to the Baltimore Avenue project, which is expected to eventually cost around $20 million.

However, Councilman John Gehrig, who was absent from last week’s work session and did not participate in the lengthy debate, on Tuesday questioned why the firehouse was still listed at $11.2 million in the proposed bond sale.

“I’m just not comfortable with this,” he said. “I don’t want it to come back that we voted on all of these numbers. It looks like we’re approving an $11.2 million firehouse. I’m fine with the actual bond amount. I just don’t know why we’re voting on something with so many questions.”

Finance Director Chuck Bireley explained the specific amounts for the individual capital projects listed in the bond sale were essentially placeholders and once the sale is completed, the town can move funds around within the bond based on needs for the various projects. In other words, if the new firehouse design comes back in at $7 million, the $4 million in savings can be applied to Baltimore Avenue, for example.

“You can approve the $48 million bond sale without specifically identifying the estimated costs for these projects,” he said. “You can include the projects, but you don’t necessarily need the itemized costs estimates for each of them.”

“We’re not held accountable for each of those numbers,” he said. “These are just allocations, or placeholders.”

James said when McGean and Bowers come back with an amended cost estimate for the new firehouse, the funds earmarked for the fire station in the bond sale can be applied to other capital projects listed.

“When they come back and the firehouse is say, $7 million, we can apply the extra $3 million or so to the implementation of the Baltimore Avenue project,” he said.

Gehrig, however, could not be dissuaded. He continued to assert that, at least on paper, the bond sale as proposed appeared as though the Mayor and Council were signing off on an $11.2 million firehouse.

“This makes no sense,” he said. “We’re putting a number on a firehouse we know we’re never going to build at that cost. We’re voting on something we’re going to do in the future.”

When asked if the goal was to take advantage of low interest rates, why wasn’t the entire Baltimore Avenue corridor funding included in the bond sale, Council Secretary Tony DeLuca explained the Baltimore Avenue project was just in the design phase and additional funding would come in future bond sales.

“The conceptual estimate for Baltimore Avenue is $20 million,” he said. “The reason we didn’t include that entire amount in this bond sale is because the design isn’t complete. Any overages for these other projects can be applied to Baltimore Avenue. The message was clear last week. We’re not building an $11 million firehouse.” 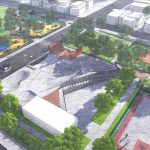 Councilman Peter Buas said reworking the design of the new Station 3 firehouse would result in savings that could be applied elsewhere. In addition, the downtown recreation complex is listed in the bond at $4.6 million, but the town is likely eligible for federal and state grants, which would also bring the cost of that project down.

“There are really only two variables in this,” he said. “One is the reduction in the estimate for the firehouse. The other is the potential grants for the downtown recreation complex, which we’re not even sure if we’re going to get.”

“As a group, do we have a maximum number for the firehouse?” he said. “I don’t want to put a blanket high number on something we’re not going to do.”

“It gave me great comfort that we can move the money around in this bond issuance for the different projects,” he said. “It gives us some flexibility.”

In the end, the council voted 6-1 with Gehrig opposed to approve on first reading the nearly $49 million bond sale as proposed. Again, about $20 million of the proposed bond sale will go to refinancing existing 2012 bonds at a lower interest rate, resulting in savings of around $1 million. The remaining amount will go to the various capital project listed in the bond.

OCEAN CITY -- There will be fireworks on New Year’s Eve uptown at Northside Park after all as resort officials this week approved a modified plan from a separate promoter to approve the show. Last month, council approved a contract with Celebrations Fireworks to provide the popular pyrotechnic displays at Northside Park uptown on the…

SNOW HILL – Two new faces are on the dais in Snow Hill now that the Worcester County Commissioners have been sworn in to four-year terms. On Tuesday, newcomers Caryn Abbott and Eric Fiori joined Chip Bertino, Jim Bunting, Ted Elder, Diana Purnell and Joe Mitrecic as county commissioners. “We have a lot of work…

BERLIN – A local nonprofit’s plans for a skate park in Berlin continue to move closer to reality. We Heart Berlin, the nonprofit that’s been working to bring more recreational opportunities to town, signed a roughly $18,000 contract with a design company last week. The company will look at potential locations and meet with local…