OCEAN PINES – Atlantic General Hospital celebrated the start of construction of the Gudelsky Family Medical Center with a groundbreaking ceremony this week.

On Tuesday, Atlantic General Hospital (AGH) staff and board members joined local officials to commemorate the start of construction of the hospital’s new outpatient medical center. The 53,000-square-foot facility, to be known as the Gudelsky Family Medical Center, is located on Route 589 north of Gum Point Road.

“We look forward to many great things from this facility,” said Rolfe Gudelsky, whose family donated $4 million toward the hospital’s Campaign for the Future.

The new center will include an outpatient surgery center, pharmacy, specialty offices, imaging and lab services and Atlantic Immedicare.

“I believe I speak for everyone when I say we are so excited to be here today,” said Greg Shockley, chairman of the AGH’s board of trustees. “We would not be here today without every person that has ever supported us as a board member or volunteer, medical staff member and associate, Auxiliary and Junior Auxiliary member and all of our past and current elected officials and community representatives who advocated on behalf of our community hospital; you are the reason this project is possible. Special thanks and recognition also go to the Gudelsky Family who believed in and supported our vision for this project.”

The facility, according to AGH President and CEO Michael Franklin, will allow the hospital to expand to five operating rooms, two of which will be at the Route 589 location. Franklin said the new facility would help eliminate wait times and reduce congregating at AGH facilities, something that is critical while COVID-19 remains a concern. He said the pandemic had slowed the project’s timeline but hadn’t weakened the hospital’s resolve.

“We need this Gudelsky Family Medical Center even more today,” he said.

The facility, to be developed by the Sina Companies, is described by AGH as the first multi-specialty ambulatory surgery facility in Worcester County. It will allow for the expansion of surgical services while also providing a more cost effective location for planned outpatient procedures.

“I think this project’s going to be very successful,” he said, adding that it would allow for more services to be done in an outpatient setting. 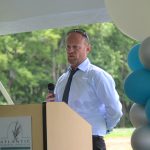 Rolfe Gudelsky’s family foundation donated $4 million toward the hospital’s Campaign for the Future.

Gudelsky said his family was happy to continue its tradition of philanthropy by contributing to AGH’s latest project.

“It’s very important for us to support the community that supports us,” he said.

Steve Green, chairman of the Atlantic General Hospital Foundation Board of Directors, credited the Gudelsky family and AGH’s Campaign for the Future with making the facility possible.

“In addition to this project the campaign enabled AGH to invest $35 million in advancing healthcare delivery in our community through five major capital projects including; the construction of the Burbage Cancer Center, the Women’s Health Center in West Ocean City and a complete renovation of our second-floor patient care areas,” Green said. “It has been a privilege to witness the philanthropic and generous nature of those involved with our Campaign for the Future. Let this project proudly serve as a representation and constant reminder of your commitment to the health/well-being of our community.”

The building should be completed in early 2023.

OCEAN CITY -- There will be fireworks on New Year’s Eve uptown at Northside Park after all as resort officials this week approved a modified plan from a separate promoter to approve the show. Last month, council approved a contract with Celebrations Fireworks to provide the popular pyrotechnic displays at Northside Park uptown on the…

SNOW HILL – Two new faces are on the dais in Snow Hill now that the Worcester County Commissioners have been sworn in to four-year terms. On Tuesday, newcomers Caryn Abbott and Eric Fiori joined Chip Bertino, Jim Bunting, Ted Elder, Diana Purnell and Joe Mitrecic as county commissioners. “We have a lot of work…

BERLIN – A local nonprofit’s plans for a skate park in Berlin continue to move closer to reality. We Heart Berlin, the nonprofit that’s been working to bring more recreational opportunities to town, signed a roughly $18,000 contract with a design company last week. The company will look at potential locations and meet with local…