BERLIN – A trio of local businesses partnered with the Calvin B. Taylor House Museum to relocate a decades-old beehive last week.

Thanks to the efforts of Baybees Honey and the Burley Building Co., the hive long located at the edge of the museum’s roof was successfully removed last Thursday. The hive is being relocated to a Bishopville farm to be cared for by the connections of The Buzz Meadery.

“We knew there were bees there,” said Melissa Reid, president of the museum. “As we got ready to replace our roof we were very adamant that those bees be saved. We all know bees are struggling.”

Earlier this month, Berlin-based Burley Building Co. began replacing the roof at the Taylor House Museum, a complex project because of the roof’s historical features. The project was further complicated by the extensive beehive the museum was committed to saving. Lauren Pascarella and Fred Kelly of Baybees Honey were contacted to see if they could help.

“Normally we do not do beehive removals, especially that high up,” Pascarella said.

Knowing that the building company was involved and willing to help, however, the beekeepers agreed to take on the project. On Aug. 19, Kelly and Burley Building Co.’s Nate Reister traversed the scaffolding and huddled at the front of the museum’s roof. Kelly used a bee smoker to calm the insects. 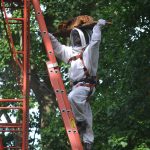 “The smoke does two things,” Pascarella explained. “One, it dilutes the pheromones being released that say ‘danger.’ Two, smoke also triggers a natural emergency response.”

That response, the same one that would occur if the hive was in danger from a forest fire, for example, drives the bees to gorge themselves on honey, ensuring they’re as full as possible before they evacuate.

“That way they can start making wax immediately in their new home,” Pascarella said, adding that the wax was needed to the queen could lay eggs.

Once the smoke had been applied, Reister used a saw to cut into the wood above the hive. He removed a large section of the hive and took it down to Pascarella so she could look for the queen while Kelly removed the rest of the remaining hive. Pascarella said finding the queen was the key to moving the hive.

“Once you capture the queen you can put her in another hive,” she said. “Eventually the colony will go with her.”

As long as they can follow her pheromones, they’ll find her. Pascarella has attached the honeycomb from the museum to the frame of a new hive for the bees to take over. She’s confident the hive will be successful in its new Bishopville location. It was so large that Baybees even has plans to save a portion to set up a new queen on. Pascarella is hopeful that second colony can somebody be returned to the museum grounds.

“They belong to the house,” she said. “They should be on the property.”

Reid said museum officials were interested in establishing a pollinator garden and would love to see the bees somehow safely returned to the property. She pointed out Berlin was designated as a Bee City by the Bee City USA program in 2018.

“We’d like to create a situation we can safely have bees—but not in the house,” she said. “We’re going to explore how we might be able to keep a beehive.”