OCEAN CITY — When Rina Thaler, executive director of the Art League of Ocean City, challenged artist Randy Hofman to put some art on the bare walls of the Roland E. Powell Convention Center in Ocean City, she had no idea of the magnitude of the result. Hofman has since filled the vast center with more than 30 large paintings representing life at the resort. The paintings are on permanent exhibition, and Hofman promises there are more to come.

“This is my pleasure, so Lord willing,” Hofman said.

The Art League has published a brochure about Hofman’s work at the Convention Center, a free publication available at the Welcome Center, the Ocean City Center for the Arts, the library, and the Chamber of Commerce.

“Randy has turned the Ocean City Convention Center into a true gallery of art,” Thaler said, “and we needed a way to let people know about this remarkable exhibition. We encourage everyone to pick up a brochure, or, better yet, stop by the Convention Center, see the artwork for yourself, and be amazed and inspired.”

“When Randy originally approached me about the possibility of displaying his works in the halls of the Convention Center, to say I was delighted would be an understatement,” Noccolino said. “The walls were barren and antiseptic, and Randy’s works provide a warm feeling. The icing on the cake was the portrait of [former Ocean City mayor] ‘Fish’ Powell that captured him in a very comfortable setting. I’d also like to thank Rina Thaler for the design and production of the brochures about the art that can be found in the Welcome Center and also on one of our display tables.” 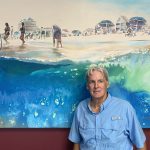 Ocean City Mayor Rick Meehan’s personal favorite is the painting of Powell. “We’ve all witnessed Randy Hofman’s sand sculptures on the beach,” he said. “Thousands of people have enjoyed his artwork over the years. Recently he has expanded his artwork with paintings in the convention center … including a painting of ‘Fish’ Powell that is an uncanny resemblance of him. The addition of artwork in the convention center expands the experience of art in Ocean City and adds something special to the building.”

Hofman, who lives with his wife, Marilynne, in Ocean Pines and paints in his studio in Newark, is already recognized in Ocean City for his art on the beach, where he has been carving sand into intricate, religious-themed sculptures for many years. A native of Washington, D.C., Hofman felt called to the “dreamy and beautiful” allure of the ocean after attending the Pratt Institute where he studied advertising design and visual communication.

The centerpiece of the Hofman exhibit is a group of eight large paintings depicting family life at the beach over generations, from a child’s first steps in the sand to a senior couple supporting each other in the surf.

“My paintings focus on the life that exists in the space between the land and the sea,” Hofman said. “Here you can see the ages of life. At the beach, it doesn’t matter if you’re young or old, everyone loves playing among the waves. Families vacationing in Ocean City come from many backgrounds and places. What we share is the love and care of our young ones, and the ones we grow old with. Like the waves on the beach, this cycle continues from generation to generation.”

The majority of Hofman’s paintings are located on the 2nd floor of the Convention Center, with the newly-installed painting of former Ocean City mayor Roland “Fish” Powell at the foot of the stairs on the main level. The Convention Center is located at 4001 Coastal Hwy. bayside and is generally open from 8 a.m. – 4 p.m. daily with no admission fee.