OCEAN CITY — The first Maryland state record swordfish is now officially on the books after the Department of Natural Resources (DNR) late this week confirmed the 301-pounder caught during the Huk Big Fish Classic in Ocean City last weekend.

As its name implies, the Big Fish Classic held last week at the historic Talbot Street docks recognizes the winner which brings in the largest single fish during the two-day event. That distinction went to angler Pete Schultz and the crew on the Real One, which hauled in a 301-pound swordfish to take first-place in the signature division.

The Real One placed in other divisions and took home a tournament-high $542,648 in prize money for its efforts in the Big Fish Classic. The winning 301-pound swordfish was quickly deemed a new state record in Maryland and on Thursday, the DNR confirmed the record catch.

The DNR compiles state records for various species in different divisions including the Atlantic Division. A few years back, DNR Fisheries added swordfish to the record books and set the minimum qualifying weight at 350 pounds. That was reduced to 300 pounds last year, but before last weekend, the slot was listed as vacant on the state record books.

With the 301-pounder caught and weighed by Schultz and the crew on the Real One during the Big Fish Classic last weekend, that slot on the state’s record books has now been officially filled. Schultz and the Real One are now the first official state record-holder for swordfish, or Xiphias gladius. 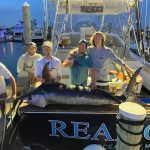 The record sword was caught in the Washington Canyon roughly 50 miles off the coast during the Big Fish Classic, a two-day tournament during which boats and teams of anglers fish in one of two overnight 32-hour windows. The big sword was taken on a dead eel on a circle hook on a 65-pound braid line and a 150-pound leader.

Schultz described the record swordfish as “the fish of a lifetime.” After the big sword was hooked, it took Schultz and the crew on the Real One an epic eight hours to boat. While Schultz was the angler on the reel for those eight hours, he praised his crew for the record catch this week.

“We put so much effort into this,” he said. “Everyone had a crucial role.”