BERLIN – The basketball courts at Henry Park are set to receive a makeover this fall following approval from elected officials.

The Berlin Town Council on Monday voted 4-0 to approve a local nonprofit’s proposal to paint the courts at Henry Park. We Heart Berlin Inc. has partnered with artist Shelton Hawkins to transform the basketball courts into a piece of artwork.

“Embellishing existing courts with art installations drives attention,” said Tony Weeg, founder of We heart Berlin. “It drives new life and sort of gives the kids that are there during this period a new sense of ownership for a new beautiful thing they’re sort of in charge of. That’s what we hope to bring with this.”

Resident Adrian Bowen told the council he’d wanted to see the courts at Henry Park painted as soon as he saw the work Hawkins did at a park in Easton.

“Just being someone who grew up in this area, I played a lot at Henry Park,” Bowen said. “I started to see the park being used for the wrong things, in the wrong way, treated disrespectfully. Nobody stepped foot on the court to play basketball so I felt, talking to Mr. Hawkins and seeing what it did for the park in Easton, I want to try to do the same thing, to kind of bring to life, Henry Park.”

Weeg learned of Bowen’s idea just as he was forming the We Heart Berlin nonprofit. He invited Bowen to join its board so the organization could tackle the project.

They were able to raise $9,000 — the estimated project cost — through grants from two local groups. The nonprofit also raised $2,000 from within the community for the project. That will serve as contingency funding for unforeseen expenses, Weeg said. 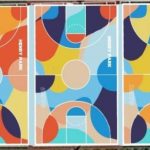 The design of the new courts was created by Kelsey Hess. Submitted Photo

When asked about maintenance, Weeg said maintaining the court shouldn’t be any different than it was now.

He added that there was no need to remove the courts’ existing paint, as it would be painted over. Hawkins is scheduled to come to Berlin the second and third week in September to work on the project. He’ll create a grid using chalk and volunteers will handle the painting. Bowen said that if the community was involved in the process, local children would have a vested interest in the park. It will also give them a chance to complete required service learning hours.

Town Administrator Jeff Fleetwood asked if We Heart Berlin had any suggestions on how to keep people off the courts while work was underway. Weeg said yellow tape and local involvement in the project should be sufficient.

Bowen added that there was little traffic on the courts in September.

Councilman Jay Knerr voiced his support for the project and praised We Heart Berlin’s fundraising efforts.

“It’s amazing you raised all the money to make it happen,” Knerr said. “This is community involvement at its best.”

Fleetwood asked if there were any guarantees regarding Hawkins’ work.

“I don’t have any sort of assurance or insurance,” Weeg said.
“I only have his track record.”

He said that if the project needed to be touched up in the future We Heart Berlin could help make that happen.

“We are a money raising machine,” he said.

Councilman Dean Burrell and Councilwoman Shaneka Nichols also expressed excitement about the project. Nichols said she really wanted to see the community play a role in it.

“This can do great things,” she said.

Weeg agreed and said he hoped it would help the town in its efforts to get funding for lighting for the basketball courts at Henry Park.

Following the council’s 4-0 vote to approve the project Monday night, Weeg, Bowen and Hawkins visited Henry Park with local media outlets throughout the week. Hawkins said he was happy to work with We Heart Berlin on the project.

“anytime somebody reaches out and they want to better their community I’m always going to try to help as much as I can,” he said.

He believes Henry Park is an ideal location for an art installation on the basketball courts because of its proximity to Route 113.

“This location is probably one of the better ones in the state of Maryland because it’s so visible with highway traffic,” he said, adding that he’d just seen a family from Iowa stop and check out the courts on their way past. “That alone lets me know it’s going to be really visible.”

The design of the new courts was created by Kelsey Hess.