BERLIN – Community members are rallying around a Berlin family this week following a house fire.

At around 6 p.m. on Monday, the Berlin Fire Company and Berlin Police Department responded to a reported house fire on Stevenson Lane. Resident Josh Davis – a marketing director for the Ocean Pines Association – said he and his girlfriend were home with his two children when the incident occurred.

“We were making dinner, and I put a pot of oil on the stove to make French fries like I’ve done many times before,” he said. “My girlfriend was cooking other things, so I went upstairs to work. She came upstairs to tell me something, and while we were talking my daughter came up to tell us there was smoke in the kitchen.”

Davis said the family ran downstairs to find the pot on fire. When he realized the flames were too big to smother, he and his family left the house and called 911.

Davis noted first responders were able to put out the grease fire quickly. However, a small, secondary fire occurred when insulation sparked on the roof. He said the fire department was at the scene for more than an hour.

“I can’t say enough nice things about the Berlin Fire Company, the Worcester County Fire Marshal’s Office and the Berlin Police Department,” he said. “They got there so fast and were so kind. I was pacing outside for more than hour with bare feet. They brought us shoes, water and towels to wipe off our faces.”

“They looked all around …,” he said. “They even did a thermal scan twice. When we were allowed to go back in after the smoke cleared, we found them hiding under the bookshelf. The fire people said they had never seen anything like that in their lives.”

Davis said he and his family are currently staying in Salisbury as they await a report from the fire marshal’s office.

In the meantime, community member Colby Phillips has launched a GoFundMe page to assist the family. 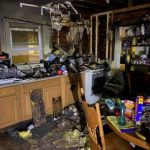 “Right now until they get a place, I created a Go Fund Me to help them as they had no insurance,” she wrote in a Facebook post. “Once they find a rental, I will repost about items needed. They aren’t allowed in the home right now, but much was smoke damaged. Anyone who knows Josh Davis knows his kind heart and that he would do anything to help others.”

Berlin Mayor Zack Tyndall added, “Last night, Josh Davis and his family had a fire in their house in Berlin. Josh, a former Bayside Gazette reporter, covered the Town of Berlin Maryland for years. Please consider donating … to help his family during this difficult time.”

Ivy Wells, the town’s director of economic and community development, said donations are also being accepted at The Berlin Welcome Center – located at 14 S. Main Street – Monday through Thursday, 10 a.m. to 4 p.m.

“Last night Josh Davis lost much of his home on Stevenson Lane to a fire that started in the kitchen,” she wrote on Facebook. “Josh had no renter’s insurance. If you’d like to purchase a gift card from a local restaurant, shop, grocery store or make a cash donation, please drop off at The Berlin Welcome Center …”

Davis said he is thankful for the many people who reached out following the fire.

“We decided we weren’t going to turn down any help, as this is something we’ve never gone through before. We’re scared and, frankly, in shock …,” he said. “I’m just so grateful to everyone who reached out and offered to help.”

According to the National Fire Protection Association, cooking fires are the number one cause of home fires and home injuries. Davis said he learned a valuable lesson following Monday’s fire that he wanted to share with the community.

“The fire marshal said what we should have done is cover the pot with a big lid, or even throw baking soda on it …,” he explained. “We didn’t even have a fire extinguisher in the house either. Never again.”