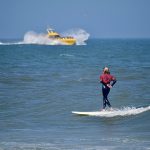 OCEAN CITY — More than 75 surfers of all ages paddled into the midtown surf in Ocean City last Saturday with hopes of “dropping in” and becoming a Maryland State Champion.

The Delmarva Chapter of the Eastern Surfing Association (ESA) hosted the day-long event on the beach at 36th street, premiered a brand new electronic scoring system and showcased an abundant level of young talent and endless “stoke.”

“We were excited to run this event using Live Heats, which allows competitors and spectators to see their scores and results in real time,” said ESA DMV Co-Director and Competition Director Laura Bren.

The system, which is used at many of the top surfing competitions in the world, helps not only add excitement on the beach for spectators, but carries a valuable educational component for the young surfers.

“It helps prepare our members for higher levels of competition as real-time scoring can often influence how a surfer approaches a heat,” said Bren.

The system was deemed a “game changer” by many of the contestants and the technology upgrade seemed to give an additional boost to the performances in the water.

Local surfers had a huge day at the state competition with 11-year old Gavin Bren taking home three first place trophies in boys U-14, boys U-16 and Open Shortboard, while 10-year-old Reef Henson was crowned champion in the boys U-12 division.  Finn Ramnarian, another local teen, took first in boys U-18 and second in boys U-16. 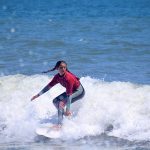 In the girls’ division, Clementine Kohut took first place in U-12 while Luca Russo and Carolina Labin battled it out for the top two places in U-14 and U-16.  Labin won a close final heat against Russo in the U-16 final, while Russo took home the championship in U-14. Alexandra Dawson and Samantha Le Crone were first and second place finishers in Junior Women U-18, respectively.

“It was an amazing day of surfing by all of our competitors from the smallest kids in the push in division to our adult contestants in the Legends and Grand Legends divisions”, said Kevin Henson, wh

o is the ESA DMV Co-Director.  “We’ve got a great group of volunteers and parents, and it’s exciting to watch our sport and our membership continue to grow.” 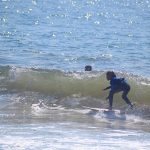 Perhaps the purest and most joyful moment on the beach was during the “Push-N-Go” division that featured the littlest “groms” being pushed in on longboards by their parents.

“We all love that event,” said Henson. “It often brings the biggest cheers from the beach and the smiles of those kids when they come out of the water is what this sport is all about.”

The ESA is the largest amateur surfing association in the world, and for over 50 years has been committed to environmental awareness as well as amateur surfing.

It has been the pipeline for world renowned surfers such as 11-time ASP World Champion Kelly Slater, 2001 World Champion CJ Hogood, and four-time world champions Frieda Zamba and Lisa Anderson.

The Delmarva District is one of the fastest growing chapters in the ESA, with almost 250 members. The all-volunteer organization puts on surf contests for residents of Maryland, Delaware 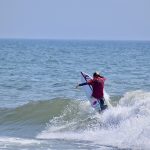 and the Eastern Shore of Virginia four to five times a year, including the Maryland State Surfing Championships.

“Our local team is producing talent and experiencing success at higher levels of competition each and every year,” said Bren. “We now have two ESA All-Stars, the current NSSA East Coast Mini-Grom Champion, a 2020 NSSA National Finalist and a member of the USA Surfing Olympic Junior Developmental Team. This success continues to motivate and encourage our youth to aspire to greatness.”

In the end, the 2021 Maryland State Surfing Championships gave spectators and competitors a day filled with stellar surfing, local pride and some stoked newly crowned champions.