OCEAN CITY – State and local leaders gathered this week to announce the expansion of Operation Save-A-Life, a local initiative to increase access to the overdose reversal medicine Narcan.

On Tuesday, Gov. Larry Hogan joined leaders of Worcester Goes Purple Warriors Against Addiction to kick off the organization’s Operation Save-A-Life promotion at Jolly Roger at the Pier. Executive Director Debbie Smullen said the program will offer Narcan to any business that wants it.

“In 2020, Worcester County saw a 71% increase in overdose deaths. All of those lost were not Worcester County residents, but they came to our county and lost their battle with addiction,” she said. “Our goal in this campaign is to have Narcan-trained staff and free Narcan available in every restaurant, bar, motel, hotel and retail establishment in Ocean City and throughout Worcester County.”

To kick off the program, officials this week gathered at Jolly Roger at the Pier, where business owner and local philanthropist Buddy Jenkins stocked the park’s ticket booth with Narcan. Jenkins said having the overdose reversal medicine on hand could save someone’s life.

“I want to remind people that nothing is greater than saving a person’s life …,” he said. “This gives an opportunity and a hope for somebody that would probably be dead if they were not administered this Narcan.” 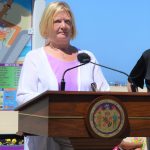 “Operation Save-A-Life only asks one question. If you had the opportunity, would you be willing to save someone’s life?,” said Executive Director Debbie Smullen.

Officials noted Narcan and Narcan training is available to anyone who is interested. Hogan said services offered through Operation Save-A-Life are invaluable, as local jurisdictions are facing an increase in overdose deaths.

“Prior to the COVID-19 pandemic, the heroin and opioid crisis was the number one health crisis facing our nation, and unfortunately, the unprecedented challenges of the past 16 months have only served to exacerbate this issue,” he said. “The most recent report released by the Opioid Operational Command Center and the Maryland Department of Health shows a 6% increase in overdose deaths involving drugs and alcohol between January and March of this year compared to the same period just a year ago, in spite of all of our efforts.”

But Hogan noted it would take an “all-hands-on-deck approach” to combat the crisis.

“By working with your local leaders, elected officials and the local business community, Operation Save-A-Life is helping to increase access to naloxone in areas that draw large numbers of locals and tourists, and I want to sincerely thank Jolly Roger and everyone involved for joining that mission, and for their effort to stock naloxone in their ticket booth in order to potentially save lives …,” he said. “This crisis is more than a health crisis. It is literally tearing apart families and communities from one end of our state to another, and all across the nation. Ultimately, this really is about saving lives, and it’s going to take all of us working together to achieve that goal.”

Officials with Worcester Goes Purple Warriors Against Addiction say establishments that participate in the Operation Save-A-Life campaign will receive a certificate of completion accompanied by the tools and skills necessary to save a life in the event of an opioid overdose. A lockable wall mount box, instruction poster, Good Samaritan Law poster and one free two-dose box of Narcan will be provided.

“With this campaign, we’re not asking you what you think about addiction, how you feel about recovery, if you think recovery truly is possible,” Smullen said. “Operation Save-A-Life only asks one question. If you had the opportunity, would you be willing to save someone’s life?”