BERLIN – A motorcade paraded through the parking lot of the Gull Creek senior living community this week to celebrate a World War II veteran’s 95th birthday.

With a color guard leading the way, vehicles with the U.S. Marine Corps, Berlin Police Department and Berlin Fire Company and local motorcycle groups were brought through the parking lot of Gull Creek on Tuesday for a birthday celebration honoring resident Morris Semiatin.

His son, Ben Semiatin, said the birthday parade was just a small way to recognize a man who has done so much for his family and for his country.

“He has done so much in his life and so much for me, he just deserves everything he’s getting now,” he said. “He has dementia and I want to make sure each day for the rest of his life is more special than the one before.”

Born in Baltimore in 1926, Morris was raised through the Great Depression and the outbreak of World War II. About a week after graduating from high school, he joined 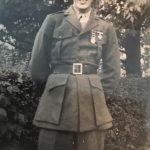 the U.S. Marine Corps, and served in the 5th Marine Division during the Battle of Iwo Jima.

During the war, Morris was one of roughly 70,000 Marines to land on Iwo Jima. He was also there to witness the raising of the American flag, one of the

“They put up two flags,” he recalled. “The first flag was too small, and they took it down and put up a second one. Everybody hollered and screamed when they saw the flag go up. I thought this must mean everything must be over, we took the island. Heck no. This was only days into the operation at Iwo, we had about another 35 days.”

Morris also received a Purple Heart for his actions during the Battle of Iwo Jima. While his primary job was to unload ships, he soon joined the fighting unit and was wounded his first night.

“I was in my foxhole, and here comes this Japanese over the hill right towards us …,” Morris said. “He threw a hand grenade at us, between the legs of the guy next to me, and he lost his legs, so I carried him out. I got wounded in my leg, and that was my service on Iwo.”

Following his service in the U.S. Marine Corps, Morris went on to become a photographer and then a White House news photographer, taking pictures of presidents, world leaders, movie and sports stars, and famous people from 1953 to 1985. His portfolio includes images of John F. Kennedy, Lyndon B. Johnson and Neil Armstrong, to name a few. 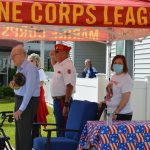 Until last year, Morris lived in Kensington, Md., where residents and first responders celebrated his 94th birthday with a drive-by parade. While he has since moved to Gull Creek to be closer to his son, Ben said he has decided to carry on the tradition.

When asked about his accomplishments over the last 95 years, Morris offered one comment.

“If I lived it all over again, I would do the same thing,” he said.