OCEAN CITY — John Joseph (Jack) Brocato, age 95, of Ocean City, passed away peacefully in the arms of his loving wife and children at his home on Monday, April 26, 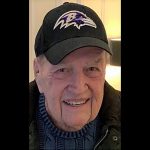 Born in Baltimore City, he was the son of the late John J. and Margaret (nee Lehr) Brocato. He is survived by his wife Mary E. Brocato (nee Kelmartin), and children, Theresa and husband Dr. William Valente, Rita A. Temes, John M. Brocato, Lori and husband Dr. Gary Bert, and Mary M. and husband Frank E. Ferrell. He was an adored grandfather to eight grandchildren and nine great-grandchildren, (with another on the way). Also surviving is his brother, Raymond and wife Mary Brocato, and many caring nieces and nephews. He was preceded in death by his beloved son-in-law, Simon Temes, four sisters and a brother.

Jack attended church and grade school at Saints Phillips and James. He proudly graduated from Calvert Hall College in 1943, earning the highest mathematics achievement award in his senior year. He immediately joined the US Navy to serve during World War II and attended basic training in Bainbridge, Md. He was sent to Norman, Okla. to gain the skill of metal working and was then stationed in Key West, Fla., repairing sea planes that had suffered body damage. When the war ended, he returned to Baltimore to care for his family, as his father passed away at a young age. He met his true love Mary Elizabeth on the Boardwalk in Ocean City in 1947 and they were married the next year.

He attended the University of Baltimore, followed by the University of Baltimore School Of Law. He graduated law school in 1954 and was admitted to the Maryland State Bar in 1955. He worked for the Baltimore City Traffic Engineering Bureau from 1948-1952 and formed a friendship with an executive at Equitable Trust Bank, who noted his potential. He was hired by Equitable Bank in 1952 as an Administrative Trainer and was promoted to Branch Manager. He attended the Stonier Graduate School of Banking and graduated in 1968. After a successful career and many promotions, he retired in 1984 with the title of Executive Vice President. He is often credited with bring Automatic Teller Machines (ATMs) to the Baltimore area.

Jack enjoyed a long and happy retirement, travelling between his homes in Ft. Myers Beach, Fla. and Ocean City, where he was never far from the sea. He enjoyed crabbing and cruising on his pontoon boat. He was a member of the Kiwanis Club of Towson and of Ft. Myers for decades. He volunteered at the Kiwanis Thrift Shop in Ft. Myers, as the cashier and had a friendly word for everyone. A devoted member of St. Luke Church in Ocean City, he enjoyed helping with collections.

Besides his family, to whom he was devoted, his other passion was walking. He could be seen every morning during the summer walking on Coastal Highway. He walked at least an hour each day, normally starting at sunrise. He will be remembered for his love of family, being outdoors, and his big smile that made anyone he met feel special. Often called the happiest man that ever lived, he was the epitome of a life well lived.

Services will be private for the family. A donation in his memory may be sent to St. Luke Church, 14401 Sinepuxent Ave, Ocean City, Md. 21842. Letters of condolence may be sent via www.burbagefuneralhome.com. Arrangements are in the care of the Burbage Funeral Home in Berlin. 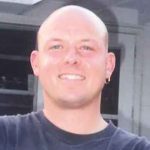 Aaron was born in Salisbury and was the son of Bruce Robert and Starlett (Yost) Todd.

After Aaron graduated from Stephen Decatur High School in Berlin, he served four years in the U.S. Army and was stationed at Fort Bragg, N.C. and Hanau, Germany. Aaron was honorably discharged as E-4 Specialist Top Rank where he engaged in electronics troubleshooting and repair, mechanics, and security. He was a self-employed auto mechanic; his business, Todd’s Auto Repair Performance, was based in Stockton.

In addition to his parents, he is survived by one son, Kristopher Robert Todd and fiancée, Ashley Sparling of Stedman, N.C.; one brother, Jed Nathaniel Todd of Bishopville; one sister, Renee Todd; one grandson, Grayson Robert Todd; one grandfather, Lemuel Yost, Jr.; and his companion Tammy Jones.

Aaron had a broad, contagious grin, hearty smile, and an upbeat positive attitude. He was happiest when working outdoors trouble shooting mechanical problems and repairing vehicles. Listening to country music, lifting weights, remodeling his home, commenting on political issues, discussing New Testament Bible passages and cruising in his green Lincoln were just some of the activities he loved to do. Aaron was an ardent Patriot, who cherished his freedoms; he also loved the Lord Jesus Christ and was baptized Aug. 30, 2015.

In lieu of flowers, memorials may be made in his name to Somerset Community Services, P.O. Box 18, Marion, Md. 21838, Memo: Aaron Bruce Todd, to assist adults with autism and other developmental disabilities in living as independently as possible.