OCEAN CITY — The Native-American sculpture, which has stood sentinel at the Inlet for over four decades, is falling into disrepair, but the artist who donated it to the town could be returning to revive it.

Artist Peter Toth presented the Indian sculpture perched near the entrance to the Inlet parking lot to the Town of Ocean City and the people of Maryland in 1976 as part of his larger plan to create a similar piece for every state in the U.S. as part of the nation’s bicentennial celebration. Through his Trail of the Whispering Giants plan, Toth created a sculpture unique to each state to raise the public’s consciousness of the plight of Native Americans and his gift to Maryland represents the Assateague Indian.

For 45 years, the sculpture carved from a 100-year-old oak has withstood fierce weather at the Inlet near the base of the Boardwalk, but it has gradually eroded to the point it will need to be restored to last more decades. A brace already shores up the feathers in the sculpture’s headdress and there are cracks forming in different areas of the statue.

At Monday’s Tourism Commission meeting, local resident Rebecca Yates said she and her husband Larry have been in contact with Toth about coming back to Ocean City to restore his original gift to the town. Yates, who had a replica of the sculpture on the table in front of her during her presentation, said the iconic sculpture is worth saving.

“It really welcomes visitors to Ocean City,” she said. “It’s one of the town’s iconic sites. People come into Ocean City and they see it right away.”

Yates told the commission she had been in contact with Toth on the return to Ocean City to make the needed repairs.

“We’ve been talking to Peter for about six months,” she said. “There’s a large split in the back and it’s been braced once. There’s another split on the lower right side. The elements have taken their toll.”

Yates said the repairs would take an estimated two weeks. She said Toth is not looking to be compensated for the actual work on the sculpture, but is seeking funding to cover his accommodations while in the resort, along with compensation for the time he will miss from his studio while in the resort.

“Peter would like to come and make repairs,” she said. “I hope the tourism commission will support that. He will donate the labor and he’s not asking for compensation for repairs. We’re looking for funding for his living expenses while he is here.”

She estimated the total cost to fund Toth’s expenses while in Ocean City would come to around $2,000 to $3,000 including accommodations and living expenses. Ocean City Hotel-Motel-Restaurant Association (OCCHMRA) Executive Director and commission member Susan Jones said she would work with her members to find accommodations for Toth. 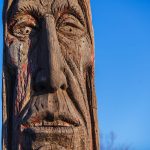 Mayor Rick Meehan made a motion to forward a favorable recommendation to the full Mayor and Council with an understanding to identify a funding source, work with the OCHMRA and reach out to the Art League of Ocean City to participate in some way. Yates was thankful and said the iconic Native American sculpture will remain in its current space for years to come.

“It won’t be perfect,” she said. “It will last another 20 years or more though.”

Yates said the initial plan is for Toth to return this fall during a major special event at the Inlet so visitors can see the restoration work first hand.

“He would come during Sunfest,” she said. “People coming down to the Inlet can see him working on it.”

Commission member Stephanie Meehan questioned if the timing for the proposed repairs was the best.

“Would October be a better time?” she said. “That’s such a big weekend already. Maybe he can be here in conjunction with the Harbor Day at the Docks.”

The current proposed repairs are not the first time the town has explored restoring the iconic sculpture. In 2013 after Hurricane Sandy, an examination of the sculpture revealed it was cracking and showing its age and plan came about to solicit bids for the needed repairs. A noted West Ocean City woodworker and carpenter came up with a plan to restore the Inlet Indian at a cost of just under $10,000.

The plan called for removing the sculpture with a crane and transporting it to a West Ocean City shop for a major repair and restoration, and then returning it to is original location. The idea got little traction when a funding source could not be identified and the restoration at that time fizzled.

Toth’s Trail of Whispering Giants includes sculptures in other neighboring beach resorts including Bethany Beach and Virginia Beach, for example. Some have been restored and in at least one case, a fiberglass mold now stands where the original sculpture was placed. Others have deteriorated and have been left to serve out their usefulness over time. Toth runs the Peter Wolf Toth Museum in New Smyrna Beach, Fla.