OCEAN CITY — With a nod to the future, resort officials this week approved a plan to eliminate nearly all fireworks shows this summer and replace them with elaborate, state-of-the-art drone shows.

TEAM Productions’ Bob Rothermel last month presented his proposed lineup of value-added special events for the coming summer season, including, among other things, the giant American flag on the beach on Memorial Day weekend, a couple of big ticketed concerts, a summer concert series on the beach, drive-in movies and drive-in concerts at the Inlet, the OCtoberfest events in the fall and, of course, the weekly fireworks shows downtown and at Sundaes in the Park at Northside Park.

Rothermel and TEAM Productions each year produces a wide variety of special events with a budget of around $300,000 from the town. It’s important to note, the annual allocation comes from the tourism budget, which is funded through the room tax, and not the general fund.

When Rothermel presented the proposed lineup of events last month, some on the council questioned whether the weekly fireworks shows downtown and at Northside Park for Sundaes in the Park still resonated with the public, or if some other option should be explored. Rothermel already had a tentative plan for elaborate drone shows synchronized to music over the ocean and at Northside Park up his sleeve, and the Mayor and Council directed him to go back to the drawing board and come back with some estimates on the drone shows after watching a show in Milwaukee online.

On Monday, Rothermel came back to the Mayor and Council with a plan to eliminate the weekly fireworks shows downtown and at Sundaes in the Park uptown and replace them with drone shows. There would still be the traditional Fourth of July fireworks, but the weekly shows would be replaced with the drone shows.

“I have revised the proposal,” he said. “What I have before you is a bold undertaking. The event industry has been taken by storm with drones. When we come out of the gate for the summer, we need to talk loud and proud.”

Under the proposal, there would be eight drone shows downtown on Thursdays beginning at 9:30 p.m. from July 8 to Aug. 19. There would also be 12 drone shows at Northside Park following Sundaes at the Park from June 13 through Sept. 5. The fireworks shows originally planned for those dates and times would be replaced, according to Rothermel.

“There will be 12-minute drone shows after Sundaes in the Park,” he said. “It’s what’s coming in the future. Fireworks are what was old, but drones are what is new.”

The proposal presented on Monday includes the giant American flag on the beach downtown on Memorial Day weekend along with a weekend-long United Beams of Light show with beacons shining into the night sky honoring those who lost their lives in the service of their country along with those on the front lines of the pandemic for the last year-plus.

Under the plan, there would be drive-in concerts at the Inlet lot during the first weekend in June, a major beach concert at the beach at North Division Street in late August featuring a national act yet to be named, and another major ticketed concert during the Art X event at Northside Park in August. The original plan called for a series of free beach concerts downtown on Thursdays during the summer. However, those concerts were eliminated in the revised plan in order to make the budget numbers work with the drone shows.

“In order to pay for the drones, we had to take some money from the beach concerts,” he said. “We’ll still have a major concert on the beach in August and another concert at the Art X event.”

Councilman Mark Paddack embraced the drone show concept and made a motion to approve the revised summer special events plan.

“Drones are the future,” he said. “We still have fireworks on the Fourth of July and New Year’s Eve. Technology is passing by so quickly, and we want to get out in front of this. If Ocean City wants a bang, we advertise the drone shows synchronized to music.”

Council Secretary Tony DeLuca pointed out the council directed Rothermel to revise the plan and come back with something different, and the promoter was able to accomplish that. DeLuca seconded the motion to approve the revised plan.

“I agree with everything Councilman Paddack said,” he said. “You did everything we asked of you. You took a pencil to it and came back with a great proposal. It’s a wow. It’s time for a change.”

However, not all were keen on completely eliminating fireworks, save for the Fourth of July show, which have been a staple in the resort for decades. Council President Matt James voiced concern about eliminating the fireworks uptown and replacing them with the drone shows.

James questioned the range from which the drone shows would be visible, and the quality of the shows the further one moves away.

Rothermel explained the expected viewing range for the drone shows.

“You have about a 180-degree viewing angle,” he said. “In this case, if you were behind the drones at Northside Park, you’d be in the water. I would think you could see them across Coastal Highway at least. When you look at the pictures, they’re from a great distance away.”

He explained the drone shows have become popular all over the country and referenced a recent show in Milwaukee, Wisconsin as an example of what will be produced in Ocean City.

Rothermel said there were some initial weather-related concerns about the drone shows, but those concerns would be the same if the town was sticking with fireworks.

“Some of my concerns about doing drones were wind issues, but we’ve pretty much nailed those wind concerns down,” he said. “There are some concerns about rain, but I don’t think we’ll have people out there in the rain anyway.”

James reiterated his concerns about completely eliminating the weekly fireworks, especially at the popular Sundaes in the Park event at Northside Park.

“I’m worried with the drone show, you won’t see it from a great distance, multiple blocks away,” he said. “It’s been nice when you can see the fireworks from a great distance away at the end of the event. My only concern is removing fireworks completely and not having them at Northside Park for the residents and visitors.”

Mayor Rick Meehan said beach fireworks can also be seen all over the downtown area, but said it was time to consider a fresh, new idea.

Meehan said after the summer of COVID last year, vacationers are looking for a fresh start, and adding the drone shows can provide that this year.

Councilman Peter Buas voiced some concern about a two-year commitment for something relatively new. The total price tag for the package presented on Monday, including the concerts, the drive-in events, the Memorial Day celebrations and the drones comes in at around $382,000, of which the drones alone contribute over $269,000.

Buas also said he would have preferred to have some input from the Tourism Commission before making such a major decision, but it was pointed out time was of the essence to lock in the package with the summer season approaching.

“I would much rather have had some feedback from the tourism commission,” he said. “I think fireworks are so cool when you see them over the beach or over the bay. We know how people love the fireworks at Sundaes at the Park. This is a two-year commitment. I’m concerned about taking away something we know people like.”

James pointed out the fireworks in Ocean City are a proven, time-honored tradition.

“I think the fireworks, while some people think they’re stale and an old concept, it’s almost like something you can count on,” he said. “Everybody likes fireworks, and some people like them more than others. I’m just worried this is going to turn out like the laser show or the light show, where it was okay, but we kept doing fireworks year after year because people like them.”

Rothermel said the two-year commitment on the drone portion of the package was recommended because of the upfront investment is company will have to make in the technology, but he would be willing to back off on that request if that was the council’s desire.

“If this means that much to the Mayor and Council, I would do it for one year and see what you want to do,” he said. “I’ll put that out there. I’ll do one year with the hope of a renewal. I’d rather not, but if that’s what you all want, then we can do it.” 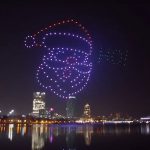 Meehan said the two-year commitment protects TEAM Production’s investment, and said he was confident the town would be signing up for drones again next year.

Paddack was asked to consider amending his original motion to include just the first year with an option for a second year. In response to Buas’ comment about the tourism commission, Paddack said he appreciated all the feedback from the subcommittee level, but pointed out the Mayor and Council ultimately have to make the decisions.

“I thought it was a two-year deal,” he said. I’m not sure if the tourism commission is the dog or the tail. We’re the Mayor and Council and we make the decisions, but I’ll amend the motion to one year with the option for renewal based on the feedback, positive or negative.”

DeLuca agreed to second Paddack’s amended motion for one year with a one-year option.

“I agree with one year and a one-year renewal,” he said. “I agree with Councilman Buas about the two-year commitment. It’s less risk. It’s actually half the risk.”

James reiterated his concerns and was the lone dissenting vote in a 6-1 council vote to approve the special events package.

“If it’s absolutely horrendous and nobody likes it, we have the option not to renew it for the second year,” he said.