OCEAN PINES – Community members are rallying to help a local family whose home was destroyed in a fire over the weekend.

Just after 7 a.m. on Saturday, the Ocean Pines Volunteer Fire Department was alerted for a residential structure fire in the 100 block of Sandyhook Road.

At the time, Worcester Central advised that the caller stated, “There was a fire on their porch, and it was spreading to the house and that they had three babies inside,” according to a news release. The call was then disconnected.

Paramedics in route to a previously dispatched medical emergency advised that they could see smoke from Ocean Parkway, according to the release. When Fire Chief Steve Grunewald arrived on the scene and established command, he advised there was heavy fire from the initial residence that had extended to the neighboring house and called for defensive operations. Contact was also made with the caller, who said all seven of their family members had safely evacuated the residence.

Crews from Engines 1101 and 1102 quickly established a water supply and placed multiple attack lines in service before entering each home with additional house lines and tools. In the house of the primary fire, crews were reportedly met with heavy smoke and fire conditions, while fire damage at the neighboring residence was confined to the exterior. With five attack lines in service, crews were able to extinguish the fire and remain on scene for an extended period of time. 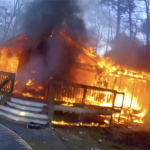 It should be noted that one firefighter sustained injuries and was transported to Atlantic General Hospital, according to the release, but they have since been treated and released. The scene was turned over to the Worcester County Fire Marshal’s Office for further investigation, and the Red Cross is actively working with the family that has been displaced.

“We know the fire started in the front of the house …,” Grunewald said this week, though he declined to elaborate further. “Everybody from the house got out safely. One firefighter was injured, but he was treated and released and doing very well.”

In the meantime, a Go Fund Me page has been made to help the family. As of Sunday, more than $5,000 had been raised through the fundraising website.

“I spoke with the mother and with them losing everything, I just hope they are able to have a little stress lifted and can use the funds to help them start over because that’s really what they are doing,” said organizer Colby Phillips.

While she does not know the family, Phillips said she and community members were able to help using social media.

“Last year when COVID hit I started a Facebook group called ‘Local Help for You Worcester County’ so people could reach out for their needs and others could step forward and help,” she said. “I do not know the family, but I have a great outreach on social media and try whenever I can to use that to get the word out to help others. I have found that so many people want to help, but aren’t sure how so I try to take the lead on helping get those things moving.”

So far, Sweet Shack, Aunt Jenny’s Unique Creations, and the Ocean Pines Aquatics Team have stepped up to serve as drop-off locations for clothing items and needs, according to Phillips. Firefighter Tracey Jones helped collect funds, in addition to the Go Fund Me page and Dot Waters, and the Ocean Pines Platform Group has donated more than $1,000 to help the family.

“I probably sound like a broken record because I say this so much, but this community is awesome,” she said. “Worcester County as a whole pulls together when there is a need or crisis. I have been witness to tons of times that people have stepped up to help their neighbor. Truly that’s what life is about, helping others.” 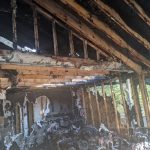 “I want to give a huge thank you to our local firefighters,” Phillips added. “They truly are our heroes. Plus the volunteers who help facilitate when there is a fire, directing traffic and making sure our firefighters are hydrated. We truly are blessed, overall, to live here.”