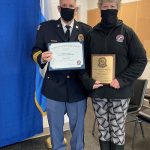 The Auxiliary Officer of the Year award was presented to Kathy Grimes by Buzzuro.

Traditionally, the OCPD and the Neighborhood Watch Association coordinators hold an annual Officer of the Year ceremony to recognize department personnel and volunteer for their accomplishments from the previous year. This year, however, as with so many other things, the traditional ceremony and dinner were not held because of the ongoing COVID pandemic and restrictions on gatherings.

Nonetheless, in keeping with tradition, the OCPD worked closely with the Neighborhood Watch Association on the annual awards and this week announced Heiser has been selected as Officer of the Year for 2020. Heiser was selected by the seven Neighborhood Watch coordinators. Also nominated for the award this year were Pfc. Nathan Denny, Pfc. Amy Gutowski, Pfc. Justin Hoban, Pfc. Joseph Laughlin, Pfc. Harry Miller and Pfc. Tyler Sheffy.

The OCPD is fortunate to have a solid core of volunteers, who donate hundreds of hours of their time to the department and the citizens of Ocean City. In 2020, the volunteers donated 1,257 hours to the department, including an astounding 959 by Kathy Grimes, who was named the 2020 Auxiliary Officer of the Year.

Other officers were honored by the OCPD and the Neighborhood Watch coordinators for their retirements in 2020 including Lieut. Glen McIntyre, Sgt. Ronnie Townsend, Corporal Albert Custer, Property and Evidence Technician Mary Marshall and Records Management Supervisor Michelle Monico. Combined, the retirees this year served a total of 137 years with the department.