As incidents in Pocomoke and Berlin have drawn criticism from those who believe the county’s animal control laws aren’t strong enough, Commissioner Josh Nordstrom says changes are being drafted. Various county departments are now working together to create more comprehensive animal control regulations.

“I’m hoping we’ll get this brought to a satisfying conclusion for everyone,” Nordstrom said.

Nordstrom first brought up the issue of strengthening the county’s animal control laws in January, citing specific concerns about a dog breeding operation in Pocomoke. In the weeks since, citizens in the north end of the county have brought attention to a situation in Berlin where a dog did not have adequate shelter.

At his suggestion, the commissioners voted to direct staff to begin exploring adjustments to animal control regulations in January. The county’s department of development review and permitting is working with Worcester County Animal Control as well as the sheriff’s office and state’s attorney to draft more comprehensive guidelines for the commissioners to consider.

“We’re looking at this from a lot of different angles,” Nordstrom said.

He added that the process would take time, however. 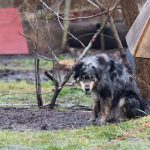 A neglected dog is pictured at a Pocomoke residence this month.

“We want to get it right the first time, not create extra loopholes,” he said.

In a Facebook post last week, Sheriff Matt Crisafulli offered similar assurances that departments were working together to find a solution.

“Our goal is to work in conjunction with these valuable entities, to create a county ordinance to supplement the state law regarding the care of our precious animals,” a post on the Worcester County Sheriff’s Office Facebook page read. “We feel that there is a necessity to strengthen the current language to allow for more autonomy with the care and custody of our animals.”

Worcester County resident Heather Melson believes it’s past time local animal control ordinances be strengthened. In a video she shared on Facebook last week she highlighted the living conditions of a dog in the Berlin area tied out in an area surrounded by standing water with very little shelter.

Nordstrom wants constituents to know changes are on the way.

“Negligence and animal cruelty will not be tolerated in Worcester County,” he said.