OCEAN CITY — Resort planners this week signed off on a private property plan to completely renovate the south end of the Boardwalk and replace vast sections with a “foody” destination open-air food court.

The Ocean City Planning Commission had before it on Wednesday a site plan review for a major renovation of the old Inlet Village property owned by the Trimper family and Windsor Resort at the foot of the Boardwalk. For decades, the site has hosted the Inlet Village, a variety of quaint shops, a couple of restaurants and bars and other attractions.

Some of the original buildings will be upgraded and renovated to accommodate upscale food service operations, while others are being demolished to accommodate an open-air food court dining area with views of the Inlet and Assateague to the south. The Frog Bar will be replaced with Bandits Bar and Grill and the building will be expanded to accommodate the food court concept. Existing businesses such as the Inlet Lodge and Harrison’s Harbor Watch will remain in place.

The project is currently going through the regulatory process, but thus far there have been no hurdles. For example, last week Windsor Resort applied for and received a parking exception for 23 spaces to accommodate the project. On Wednesday afternoon, the Worcester County Board of License Commissioners (BLC) granted the project’s request for a Class B beer, wine and liquor license for the Bandit’s Bar and Grill element.

Later on Wednesday night, the planning commission enthusiastically approved the site plan with no concerns raised and little discussion. The only real condition put on the site plan approval was a requirement to work with the Ocean City Development Corporation (OCDC) to ensure the final design is in keeping with the character of the historic downtown area. Zoning Administrator Kay Gordy said the BZA had already approved the parking exception for the project.

“They asked for and received a 23-space parking waiver for the change of use,” she said. “There is the Inlet lot, the old Whiteside Lot and another lot at Somerset Street. There is ample parking in the downtown area.”

Gordy said a staff review of the project’s plans resulted in a favorable recommendation.

“They are adding restaurant square footage to the Frog Bar,” she said. “Basically, everything is in order if you choose to approve this. The staff recommends approving it.”

Windsor Resort President Antoinette Bruno provided a description of the overall concept and said the project would help jumpstart the revitalization of the downtown area.

“Winsdsor Resort would like to be at the forefront of renovating downtown,” she said. “For the last five years or so, there has been a steady decline in the downtown area, including our properties. The Inlet Village is a little tired and the facades are outdated.”

Bruno explained some of the existing buildings are being demolished to create the open-air food court concept. Other existing buildings will be renovated and turned into stalls, or mini pop-up restaurants offering a wide range of upscale food and drinks. 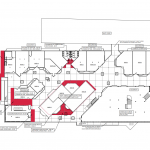 “The property has one-of-a-kind views of the Inlet and Assateague,” she said. “It’s an ideal location for foody tourism. This will bring a nice array of food to the south end of the Boardwalk.”

Project Architect Keith Iott said the original plan was the create a free-standing building as the centerpiece of the food court, but the decision was ultimately made to expand on the existing Frog Bar building.

“All of the exteriors are being renovated, including the siding and the roofs,” he said. “The addition is now going to be attached to the Bandits Bar and Grill. It’s not going to be a free-standing building. It’s going to create more open-air space. The whole objective is to maximize the views with a lot of open space.”

For the most part, the planning commission gushed over the concept, including commissioner Palmer Gillis, who called it “a very exciting project.”

Bruno said the concept was an upscale food court. Some early concepts include a Greek-style fish fry restaurant, an upscale taco restaurant which will mill their own corn and make tortillas from scratch. Another offering will be authentic lobster rolls. Bruno said the company is still looking for a barbeque concept and an ice cream shop concept. She said visitors will be able to pick and choose from the various food stalls and enjoy the offerings in the open-air food court.

“Guests will be able to order from any of the stalls with just one payment,” she said. “A food runner will bring guests their food, or they can pick it up at the carryout window. They will be able to walk out and sit in the open areas and enjoy the views with their food and drinks.”

The only real condition placed on the site plan approval was the requirement to work with the OCDC on the final designs including building styles and color schemes, for example.

“The OCDC Downtown Design Committee does support the renovation work and overall plan, which will create a food court environment with outdoor seating,” OCDC Executive Director Glenn Irwin said. “This new use can become an anchor project for the downtown area that will add to the vitality of the southern end of the Boardwalk.”