BERLIN – The coming year will bring a variety of changes to Berlin’s landscape as several construction projects are poised to begin.

Construction of a 7-Eleven, a new building at I.G. Burton Chevrolet and a variety of new apartments are all on the horizon in Berlin.

“We are about to have construction projects on just about every major thoroughfare around town,” said Dave Engelhart, the town’s planning director.

While the projects were vetted and approved by the town’s planning commission throughout the past year, they’re all nearing construction in the spring of 2021. Engelhart said the new I.G. Burton building was close to beginning construction on Old Ocean City Boulevard while Oceans East was set to begin its second phase of apartments just around the corner on Seahawk Road. On Maple Avenue, Wolfe Terrace will undergo a substantial renovation and expansion and be renamed The Willows At berlin while around the corner on Flower Street, Homes for America will renovate the apartments at 113 Flower St. and demolish and replace the dilapidated apartment building next door at 115 Flower St. 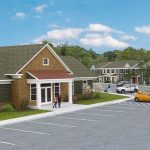 A rendering of the Wolfe Terrace renovation project is pictured. Submitted Photo

“This is all going to happen around the same time,” Engelhart said. “This spring and summer is going to be busy.”

Also looming is the 7-Eleven proposed for the corner of Route 818 and Route 50, as is construction of another medical building on Old Ocean City Boulevard. Engelhart pointed out that while citizens often associated annexations with growth, there was nevertheless plenty of construction set to occur in Berlin.

“It’s going to be a busy time,” he said. “These are concrete things that are going to happen.”

As for 2020, Engelhart said the town had seen five new single-family homes built and that his office had issued a total of 308 permits. While that was an increase compared to 2019, when there were 236 permits issued, Engelhart attributed much of the jump to the fact that the apartments at Wolfe Terrace had been permitted individually.

“That’s not unprecedented,” he said. “We did it at Cannery Village too.”

He acknowledged, however, that 2020 had still been a busy year for his department and attributed it to the economy.

“It’s been strong, even with COVID,” he said.

He added that low interest rates were motivating developers.