OCEAN CITY — For four decades-plus, the iconic BJ’s on the Water has been a fixture on the resort’s culinary and nightlife landscape, but it will eventually be replaced with a new restaurant after resort planners approved the site plan for the project this week.

Established by Billy and Maddy Carder on 75th Street and the bay at 75th Street in 1979, BJ’s on the Water is closing. The property has been sold to another popular resort restaurant group, owner Chris Reda and his team with the Ropewalk properties.

On Tuesday, the Ocean City Planning Commission reviewed a site plan for the proposed new establishment that will eventually replace the old restaurant and bar. The proposal calls for a new two-story bayfront establishment on the same site with a sandy beachfront area along the water, nearly 9,000 square feet of dining areas, including over 700 square feet on a rooftop terrace and other amenities.

According to the site plan and staff notes, the new establishment, to be called Windward OC, meets the zoning requirements although the restaurant will occupy a smaller physical footprint because of critical area requirements. BJ’s on the Water practically sat in the water, but it was built well before critical area laws were established. As a result, while the original restaurant was set back just about five feet from the water, Windward OC will sit back about 25 feet from the bay.

Satisfied the Windward OC site plan met the zoning and parking requirements, along with other requirements for height and density, the planning commission ultimately approved the site plan on Tuesday. The town’s planners approved the site plan after hearing some concerns from future neighbors about potential noise and parking problems. Other neighbors on hand for Tuesday’s virtual Zoom meeting also raised concern about potential impacts on local wildlife in the area.

Planning Commissioner Chris Shanahan first brought up the potential noise issue with the new establishment and its impact on neighboring properties.

“I’ve heard from residents concerned about the noise from the rooftop area,” he said. “How will you mitigate that concern from the neighbors?”

Heather Morrison with Fisher Architecture, which is designing the new restaurant, said the potential noise shouldn’t be a concern for neighbors and there would be constraints put on the project from other agencies in the approval pipeline.

“I’m sure there will be time constraints and other conditions related to noise,” she said. “Those kinds of things are pretty standard and will likely be handled by the liquor board.”

Local resident Frank Vernet said he still had concerns about the potential noise.

“It looks like you’re going to have 250 people down on the beach and another 100 to 150 on the terrace,” he said. “It’s going to be very noisy. It’s going to be a major nuisance for residents.”

“We have talked about sound and we’re very much aware of our neighbors,” he said. “If it becomes a problem, we can build a sound wall like we did with Ropewalk. We want to be good neighbors. When we did Ropewalk, we were actually in the stairwells of the neighboring condos with walkie-talkies checking the sound levels.”

Reda said Windward OC was not intended to have a nightclub atmosphere with the associated noise problems they potentially bring.

“It’s really more of a restaurant,” he said. “We’re not going to have bands or loud music out there. We can use a sound wall if we have to. We’ll address every concern that comes up right away.”

Shanahan said the town has ordinances in place to handle potential noise issues. 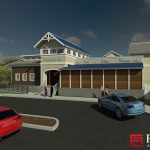 “They have to comply with the noise ordinance and I’m certain the liquor board will put on some other restraints,” he said. “They have been great neighbors with their other properties and I believe they’re going to be proactive with any issues.”

Another local resident raised the issue of parking. Based on the code, the new Windward OC is required to have 86 parking spaces, but the site plan calls for 88 along with four handicap spaces. Nonetheless, the local resident voiced concern it still might not be enough.

“Thanks for proactively addressing our concerns about noise,” she said. “My concern is with the parking. We have not had a problem with BJ’s, but they need all of the parking they have and your capacity is two-fold. We know as a practical matter it isn’t enough.”

Reda said the developer and architect carefully considered the amount of parking needed to accommodate the new establishment and were confident what was planned will be sufficient.

“We have the parking required by the code,” he said. “We believe with more people using Uber and ride-sharing these days, we’ll have more than adequate parking. We will also look into having a valet service if we need that. We’re also always searching for different areas for parking.”

Shanahan said it was in the developers’ best interest to get along with its new neighbors.

“The developer seems like a good neighbor in the community,” he said. “This has been a good exercise in bringing these groups together to address some of the concerns. They are investing a lot of money in this project and I’m sure they are going to be good neighbors.”