While most boats use the harbor to unload their catch, passersby watched as the Rita Diane was loaded up with bin after bin of horseshoe crabs. The fishing boat, which goes out five nights a week to catch the crabs, returns them to the water after they’ve had a few tablespoons of blood removed at a collection facility. That blood plays a vital role in ensuring vaccines — including any potential COVID-19 vaccine — are safe.

“If every person on the face of the earth gets at least one shot in their life, they owe their health to the horseshoe crab,” said Allen Burgenson, chairman of the Atlantic States Marine Fisheries’ Horseshoe Crab Advisory Panel.

Horseshoe crabs, which live along the East Coast of the United States, were harvested for fertilizer and livestock feed up until the mid-20th century. In recent years, however, the crabs have been caught primarily for bait and biomedical purposes. Since the 1970s, horseshoe crab blood has been used to make the Limulus Amebocyte Lysate (LAL) test. That test detects endotoxin.

“The (horseshoe crab) blood cells contain a primitive immune system that clots in the presence of endotoxin, one of the deadliest toxins on earth,” Burgenson said. “Endotoxin is ubiquitous. It is in the water we drink, on our skin, on environmental surfaces, in our gut. None of that is hazardous unless it gets into our bloodstream.”

Years ago, anyone who received an injection was taking the risk of getting sick with fever, according to Burgenson. Now, however, the federal government requires that vaccines and implantable medical devices are tested with LAL.

“Every person that has ever received an injection owes the safety of that injection to LAL and the horseshoe crab,” Burgenson said.

George Topping, who works on the Rita Diane, was approached by a company that produces LAL more than 20 years ago. He’s been catching the crabs ever since.

From roughly mid-June through mid-November, the Rita Diane — manned by a captain and two crewmembers — goes out to catch horseshoe crabs. The boat goes out at night, so the crabs aren’t subject to extreme summer heat, and drags a net along the bottom of the ocean to pick up crabs. Topping and the crew put the crabs in bins and bring them back to the commercial harbor, where the bins are transferred to an air-conditioned truck and transported to a blood collection facility. Once there, about three tablespoons of blood are removed from each crab and a small divot is made in each crab’s shell to denote that fact that it’s been bled.

The crabs are then returned to the Rita Diane, which brings them back to the area from which they were captured — all within 24 hours.

“We handle them just like a baby,” Topping said.

While critics of the LAL industry decry its impact on horseshoe crab populations, Topping says there’s only a 2-5% mortality rate and that the vast majority of crabs return to the water just as healthy as they left it.  Burgenson agreed and said the LAL industry worked with both the Department of Natural Resources and the Atlantic States Marine Fisheries Commission to ensure that best practices were followed and that no major impact on crab populations was noted.

“When those crabs are going back into the water they’re actively moving — we don’t bleed sluggish crabs,” Burgenson said, adding that a crab’s overall health was assessed prior to blood being drawn, just as a human’s health was. “It’s the same as you donating blood to the American Red Cross.”

And while there are opponents of the practice, Burgenson says there’s not really an alternative. Testing products with LAL is required by federal law.

“That’s one of the things folks don’t understand—the criticality of this program,” Burgenson said. “There is nothing else.”

While American horseshoe crabs live up and down the East Coast, there are only four blood collection facilities — in Maryland, Massachusetts, Virginia and South Carolina. Those facilities are regulated by the FDA and licensed by each state’s department of natural resources. Burgenson said they report statistics (number of crabs caught, number of crabs bled, etc.) weekly and are subject to spot inspections. Red flags are raised if there are discrepancies among the numbers.

“You’re allowed a little bit of wiggle room but if our numbers vary significantly the individual company could lose their collection permit, which would essentially put them out of business,” he said.

While Burgenson is not worried about the impact LAL production has on horseshoe crabs, he is concerned about strain put on the populations by other issues. Practices like beach replenishment and beach erosion protection hurt the crabs.

“Every time you put riprap on a beach crabs get stuck and die,” he said.

Delaware’s “Just flip ‘em” program was created to help stranded horseshoe crabs make it back to the water.

“I’ve been flipping horseshoe crabs since I was a 3-year-old when I’d go surf fishing with my father …,” Burgenson said. “It won’t hurt you and it costs you nothing to be kind. Turn it over and put it back by the water. If folks would take that simple act of kindness the number of crabs saved would be huge.” 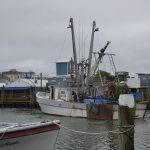 After about three tablespoons of blood are removed from then, the horseshoe crabs are returned to the ocean by the Rita Diane crew.

Here in Ocean City, another issue that could impact horseshoe crab health is the wind farm proposed off the coast. Topping says there are no studies regarding the impact of wind farms on horseshoe crabs. He’s worried about the possibility of wind turbines hurting the lone horseshoe crab fishery used to make the LAL depended upon worldwide. There are three offshore wind sites proposed in the Carl N. Shuster Jr. Horseshoe Crab Reserve, he said.

“We need to know what the impact is going to be,” Topping said.

Despite the fact that he believes the importance of horseshoe crabs in relation to the wind farm is being overlooked, Topping acknowledges that the crabs are getting some well-deserved attention related to COVID-19. LAL will be used to test the vaccine.

“That’s a big deal,” said Topping, who’s always appreciated the importance of the horseshoe crab industry. He says boats like the Rita Diane are helping protect human health and at the same time are keeping an eye on horseshoe crab sustainability. “We’re helping people and we’re helping to protect the resource.”

Burgenson was quick to point out that despite the huge demand for a COVID vaccine, there won’t be a substantial increase in the amount of LAL needed.

“Adding a COVID-19 vaccine to the healthcare system’s arsenal is no different than adding the initial production of any other large-scale produced vaccine to the world’s vaccine stock,” he said. “Once the original vaccination schedule is completed, and the five billion doses administered, there is no need for such high-volume vaccine manufacturing. Production of COVID-19 vaccines will fall back to a maintenance schedule of production, the same as most other vaccines, such as measles, polio, etc.”