OCEAN CITY — Edith Ann (Edie) Brennan of Ocean Pines died on Oct. 12, 2020. Edie was a star in the field of real estate and a star of the local 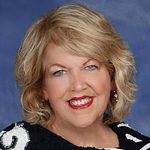 Her real estate career spanned more than 40 years. She was the first woman “on the line,” working for Boise Cascade selling lots in Ocean Pines in the early to mid-70’s. She and one other Realtor sold almost all of the units at the Capri condominium in Ocean City right after it was built. She received many accolades over the years including Realtor of the Year in 1985, the Coastal Realtors Lifetime Achievement award in 2015 and the National Realtor Emeritus award in 2018. Edie loved getting to know her clients and she took pride in delivering professional service. She was most recently an Associate Broker with Berkshire Hathaway Home Services/PenFed Realty.

She entertained audiences with the Ocean Pines Players as a lead actor and she worked behind the scenes as a director. She was involved with more than 50 productions. She loved musicals and singing. She was also a past-president of the community theater group. Her favorite role was that of Gypsy Rose Lee.

Edie is survived by her husband James Bentley (Jim) Adcock; a daughter, Amy Brennan and son-in-law Ron Ohringer; and two grandsons, Casey and Derek Ohringer. Edie was very close with her nieces Marilyn Wellington (Mark), Amber Burgess (Randy) and Katrina McDonald, and all of their children. Edie was also a step-mom to Jim’s children, Jason Adcock and Jessica Dziemburski (Bob) and grandmother to their children Makenna and Kara Dziemburski.

Edie was preceded in death by her mother and father, Marilyn Miller DeHoff and Albert Bixler DeHoff, and her sister, Kristy McDonald. In lieu of flowers, please consider a donation to Coastal Hospice & Palliative Care in gratitude for their love and good care of Edie. http://www.coastalhospice.org A celebration of life for Edie will be held in the future. Letters of condolence may be sent via: www.burbagefuneralhome.com . 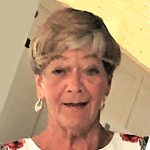 She was born In Spokane Washington, the daughter of the late Dana Wagner and Margaret Gilbert. She is survived by her beloved husband, Michael Bulkley, and children, Daniel A. Noble and his wife Cara of Sugar Hill, Ga., Kimberly L. Noble of Bozeman, Mont., Amy M. O’Connell and partner Rick Cernak, of Ocean City, and Mary E. Hunter and her husband Al, of Severna Park, Md. She was loved by her 13 grandchildren, Maureen, Peighton, Jack, Danica, Charlie, Grace, Paige, Tommy, Zachary, Randi, CA, Steven, and Samantha, and five great grandchildren. Also surviving is a sister, Janice Berquist and her husband Peter of Seattle, Wash., and nephew Tom and nieces Karen and Susie.

Dee, as she was known by family and friends, was an amazing, mother, wife, sister, daughter, aunt, grandmother, great grandmother and friend. She was first mate to Mike and they brought each other happiness in all of the adventures that their life had taken them on.

Despite all these roles she always made herself available, she could make a stranger feel like a family member and most of the time had a smile on her face. The smile that could light up a room. Dee could tell a story that had you feeling like you were right there or at least got to see it through her eyes, (sometimes more than once).

She was proud of all of her kids and the kids they have raised. She stayed on top of all of the graduations, achievements, promotions, sports activities, weddings and looked forward to being at as many as she could.

Dee was a successful business woman who worked as a marketing manager and ran a successful sport fishing and vacation rental business with Mike. In addition to loving and caring for her family, she also enjoyed traveling, deep sea fishing, boating, gardening and being a wonderful hostess.

A Catholic mass was held on Wednesday, Oct. 14 at 11 a.m. at Holy Savior Catholic Church in Ocean City. Rev. John Solomon officiated. https://stmarystaroftheseaocmd.com/ Interment was private for the family. A donation in her memory may be made to Ocean City Reef Foundation, P.O. Box 1072, Ocean City, Md. 21843. Letters of condolence may be sent via: www.burbagefuneralhome.com . Arrangements are in the care of the Burbage Funeral Home in Berlin. 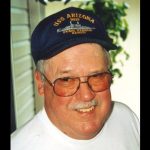 He was the husband of Marguerite Jane McPhaul (nee Strigle) of Fairhaven in Sykesville.

He served in the United States Navy, worked as a technician for Proctor and Gamble and received several special awards and was a member of the American Legion in Woodsboro.

A memorial service will be held at a later date.

Memorial contributions can be made to Carroll County, SPCA, www.hscarroll.org/donate. The Humane Society of Carroll County, 2517 Littlestown Pike, Westminster, Md. 21158. 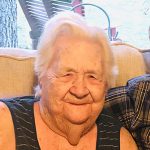 The devoted wife, loving mother and grandmother went to be with our Lord and Savior on Oct. 7,2020.

She is survived by her faithful and loving husband of 60 years, Horace F. Campbell; son Frank and wife, Carolyn of Berlin; grandchildren Wayne and wife, Sarah of Whaleyville, Mona and Tyrique Powell of Salisbury; as well as several bonus grandchildren including Penny Carr; great-grandchildren Paisley, Trentt and Troy; brother-in-law Merrill Campbell of Libertytown; and several nieces, nephews and cousins.

She was preceded in death by her parents, George and Ethel (Parker) Aydelotte; brother Clarence and wife Margaret; in-laws Herman and Edna Campbell; daughter-in-law Lana (Thomas) Campbell; and several brothers and sisters-in-law.

In her earlier years she worked at American Sales, a local shirt factory and was also a poultry grower. Later in life as a homemaker Ella enjoyed spending time with her husband and family. She was fond of taking the scenic routes and taking trips to Pennsylvania. She enjoyed talking with friends and eating oyster fritters, going to fund raiser dinners at local churches.

A graveside service was held Monday, Oct. 12, 2020 in the Evergreen Cemetery in Berlin. Arrangements are in the care of the Burbage Funeral Home in Berlin. Condolences may be shared with the family via www.burbagefuneralhome.com. 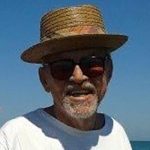 He was born on July 14, 1934 in Baltimore to Michael S. Maltese and Lena D Scallio. He worked many years as a merchant vendor in the Ocean City area. Being a local, he loved to sit on a bench and people watch. Those that knew him looked forward to seeing what was in his magic trunk. We will miss him and his stories, but they will live on in the Ocean City history of characters.

Stephen is preceded in death by his beloved son, Jason Maltese. He is survived by his loving life partner, Renee Serra; daughters Danielle and husband John Oldaker, Lena and husband Eric Roth; and sons Mike and wife Charlene Maltese, Steve Maltese Jr. and Chris and wife Kristy Serra. He had many grandchildren and great grandchildren. He also had many loving family members from the Serra side of the family.

There will be no funeral service at this time. Condolences may be sent to the family via, www.burbagefuneralhome.com

Griffin was born in Roberts, Md. on Aug. 29, 1931. He was preceded in death by his parents, Griffin B. and Hattie Mae Ervin Conley; his wife of 49 years, Mary Catherine “Datie”; his brothers, James Conley and Roy Conley; and his sister, Beverly Ann Conley.

Griffin enjoyed racing horses after he retired. He was an avid fox hunter. Griffin also enjoyed traveling and bird watching his purple martins. 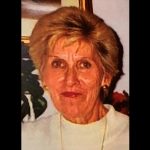 Born in Ocean City, she was the daughter of the late Hugh T. Cropper, Jr. (former mayor of Ocean City) and Mildred Baker Cropper. She is survived by her beloved husband of 62 years, William D.(Bill) Smith, and daughters, Deborah Frene and her husband Steve of Berlin, Diane Brissey of Berlin and Jennifer Amrhein and her husband Jack of Belair. There are eight grandchildren, Jason Parker, Lindsay Ashton, Lauren and Sarah Brissey, Rachael Burdeshaw, Matthew Brissey, Eric and Laura Amrhein; several great-grandchildren; and many cousins, nephews and nieces. Also surviving is her sister, Virginia Denayer of Salisbury, and a brother, Hugh T. Cropper, III, of Berlin. She was preceded in death by her son, Roger Smith.

Carole was in the first graduating class of newly built Stephen Decatur High School. Before retiring, she and Bill were owner/operators of Smith Real Estate and Insurance in Berlin.

She enjoyed a long, happy life together with husband Bill, playing golf, traveling, playing cards, and spending quality time with family. A devoted wife and mother, she found time to be a volunteer at Atlantic General Hospital, Diakonia, member of Compassionate Friends, and Berlin Chapter of the Order of Eastern Star.

Due to concerns about COVID-19, a small family-only service will be held at Buckingham Presbyterian Church in Berlin. Pastor Mark Piedmonte and Rev. Olin Shockley will officiate. Interment will follow in Evergreen Cemetery. The family would love to receive letters sharing fond memories of Carole. They may be sent via: www.burbagefuneralhome.com . Arrangements are in the care of the Burbage Funeral Home in Berlin.