OCEAN CITY — The resort area’s representatives in Annapolis have vowed to pursue even stronger legislation aimed at thwarting some of the behavior associated with the pop-up car rally that inundated Ocean City again last weekend.

State Delegate Wayne Hartman (R-38C), who represents Ocean City and Worcester County, was on the front lines for much of the weekend, riding along with the Ocean City Police Department on Friday and the Worcester County Sheriff’s Office on Saturday. Hartman said in a taped message what was displayed in pictures and videos of the unofficial event did not do it justice.

“It’s hard to describe and hard to imagine what happened in Ocean City and how intense it was and the magnitude of it,” he said. “It was typical for 12 to 15 law enforcement officers to be dispatched to a particular site to disperse crowds. More often than not, those law enforcement officers were met with rocks, water bottles, beer cans and fireworks being shot at them.”

Hartman, who was instrumental in getting the enhanced special event zone legislation through the General Assembly last winter, vowed to go back to the drawing board this year.

“It’s important to realize even with everything that was done and the help of the new law and changing the habits of the drivers, still more needs to be done,” he said. “There was a rumor that the governor was here and that was just a rumor. I assure you I will share with the governor my first-hand account. In the meantime, I want to introduce in the Maryland General Assembly a bill to allow our law enforcement officers and first-responders to be protected under a hate crime bill and make them a protected class. That would be an additional tool that law enforcement would have next year. When they are met with this kind of behavior, it could be treated as a hate crime because that’s just what this is.”

State Senator Mary Beth Carozza (R-38) also said she will continue to work with Ocean City officials, local law enforcement and the Hogan administration to take additional preventative and enforcement actions aimed at the most disruptive and destructive pop-up car rally participants. Carozza praised the Ocean City Police Department (OCPD) and its allied partners for doing yeoman’s work in what was seemingly an impossible situation at times last weekend.

“I join with thousands of local residents and business operators to express deep, heartfelt and sincere appreciation and prayers of thanks for all that law enforcement, fire, emergency management, dispatchers, public works and city employees have been doing to keep Ocean City and our home community safe,” she said. “This has been a very difficult week for Ocean City. As Ocean City Police Chief Ross Buzzuro said, the majority of these visitors are not car enthusiasts. They are here to disrupt, destroy and disrespect our community and law enforcement.”

Like Hartman, Carozza was also instrumental in getting the enhanced special event zone legislation approved last winter and vowed to work with the OCPD and the town to determine what other legislative remedies might be possible. 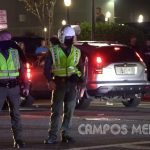 “From my conversation with the leadership of the OCPD and allied law enforcement command, I expect to hear their future public safety recommendations,” she said. “I believe we need to allow our professional law enforcement leaders to assess the weekend, conduct their after-action review and hear their specific recommendations for the future with the input and support of the public.”

Carozza said she supports Hartman’s efforts to introduce legislation that would classify attacks against law enforcement as hate crimes. She is also working with her colleagues on the Senate Judicial Proceedings Committee to advance additional resources and protections for first responders.

Carozza said the violence against police officers in Ocean City last weekend came at a time when some of her colleagues in the General Assembly are debating bills that would create less support and protection for law enforcement.

“I will continue to do all I can to support law enforcement and make public safety my top priority, especially at a time when the General Assembly has been holding anti-police hearings in Annapolis and considering legislation that would weaken law enforcement,” she said.

OCEAN CITY — It now appears there will not be a Christmas Parade in Ocean City this year after county health officials late this week voiced concerns about the modified plan.On Tuesday, Special Events Director Frank Miller pitched the concept of a modified Christmas Parade uptown on Coastal Highway planned for Dec. 5. The parade… Read more »

BERLIN – Changes in meeting procedure prompted questions from one longtime councilman this week.During Monday’s meeting of the Berlin Town Council, Councilman Dean Burrell expressed concern regarding some operational changes implemented by Mayor Zack Tyndall in the weeks since his election. Tyndall has eliminated the recital of the Lord’s Prayer at the start of each… Read more »

NEWARK – More than half of Worcester County Public Schools students are back in their classrooms this week.On Monday, the school system welcomed back a third wave of students, bringing the total who have returned to in-person learning to 56%. All students who want to return to school this academic year are expected to do… Read more »

OCEAN CITY — It appears there will be a Christmas parade in Ocean City on the first Saturday in December after the council majority on Tuesday voted to move forward with the event.Special Events Director Frank Miller on Tuesday pitched his concept of a modified Christmas parade uptown on Coastal Highway on Dec. 5. The… Read more »