BERLIN – Town officials opted to move forward with a controversial planning commission appointment despite objections from the public.

On Monday, the council voted 3-1 to approve Mayor Gee Williams’ nomination of Austin Purnell to the Berlin Planning Commission. Councilman Zack Tyndall, who voted against the nomination, argued in favor of tabling a decision on the issue, which will be considered by the town’s ethics commission Wednesday.

“We have an election that’s literally a week away…,” Tyndall said. “I think we should wait until the second meeting of October to let the new council take office and evaluate the candidate.”

Purnell, who was sworn in right after the council approved his nomination, said he was just excited to be serving the town he’s spent most of his life in.

During Monday’s meeting Williams said that upon learning of the resignation of John Barrett from the planning commission, he’d spoken to four people who’d expressed an interest in serving and asked each of them to submit a letter addressing their experience and thoughts about Berlin. He said that had been three months ago and he’d only received one letter — from Austin Purnell, son of Councilman Troy Purnell. Referencing social media chatter regarding Purnell’s nomination, he said Purnell would recuse himself if a topic he had an interest in came up.

“I can’t help but notice some things on the internet and quite frankly anybody who’s appointed to any commission has to recuse themselves — it’s not an option — if any business comes before that board or commission which they have any business interest in,” Williams said. “Those people that say the Purnell family and businesses receive some special treatment, just don’t know what they’re talking about.”

Resident Jim Meckley said he had nothing against Purnell but objected to the appointment.

“I feel this is a rather blatant choice that is in very much conflict of what the planning board, the zoning board and the town council do together,” he said. “As we know Mr. Purnell is a Realtor, he is a developer, and he has a lot of different properties and so forth along with his father in the Town of Berlin. I just feel that it would be a conflict of interest.”

He added that Williams claimed he listened to the community.

“I don’t feel that this happened today,” Meckley said. “I have not talked to one person in this community, not one business owner, or even some of the leaders in town, that were not appalled by your decision to appoint Mr. Purnell.”

Councilman Thom Gulyas interjected that Meckley hadn’t talked to him.

“I’m a business owner and I’m a leader in this town,” Gulyas said.

Meckley asked if he could continue.

“Absolutely,” Gulyas replied. “But if we’re going to talk conflicts be careful because there are a lot of them sitting here right now.”

Meckley said he hoped the mayor would rescind Purnell’s name or table the appointment until after the ethics commission met.

Williams said that if there had been an ethical issue with Purnell he wouldn’t have nominated him. He said Berlin was a small town and there were often situations in which committee members had to recuse themselves.

“This is all very open,” he said. “I believe that there is no reason to impugn the integrity of Austin, saying he won’t recuse himself, because quite frankly if he didn’t the chairman would simply say you can’t vote.”

Williams said he felt more comfortable appointing a person who was involved in various things and actually understood the town.

“If you know no one or have no affiliations I question if you’re really suited to make decisions on behalf of the community,” Williams said.  “This  is a small town. Many people know many, many local folks. It’s the nature of small town government. It works well. There’s no hidden agenda. There’s no secret government. This is all stuff that, especially since the age of the internet, has just come out of somewhere. This is not the nature of the town. I quite frankly like the fact we have someone who knows about building and development and issues that are required. It’s an advantage for the town.”

He called the objections to Purnell narrow-minded.

“I don’t think it applies at all in this situation,” he said. “I don’t have any reservations about making what I think is a very appropriate nomination.”

Resident Kim Holloway said she was one of several people who’d filed an ethics complaint regarding the nomination of Purnell. She said there were numerous other possible individuals, rather than the son of a builder and developer who served on the town council and had many projects in town.

She said she filed an ethics complaint the day she found out about the nomination and had since spoken to other citizens about it.

“I’ve talked to many many people — not you Mr. Gulyas, because I know your arrogance,” she said. 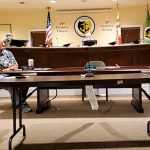 Berlin Councilman Thom Gulyas is pictured at Monday’s council meeting criticizing a resident in the audience.

Gulyas immediately cut her off and told her to keep it in line.

“You’re the same way, you and your husband,” Gulyas said. “I’ve put up with you people for six damn years. I’m sick and tired of it. Everything online, that’s where you’re going to pull this from. Whoa whoa whoa this is my meeting not yours. Not yours. Not yours … You know Kim every damn time you’ve come to these meetings all you’ve wanted to do is bitch and complain. You’ve been here three times.”

After asking the mayor to intervene and get the meeting in order, Holloway said she’d spoken to business owners and residents who were concerned about the appointment.

“I just think it’s in the best interest that he pulls his name or the ethics commission reviews this and makes a decision before he is appointed to this position,” she said.

Resident Bob Palladino, a member of the town’s board of zoning appeals, agreed that he thought there could be possible issues both with Purnell’s father being a councilman and with his professional interests.

Williams said that if the ethics commission — which has received five complaints regarding the issue — found a problem with the appointment it would be null and void.

“Quite frankly if every time someone objected to a nomination and said we’re going to take it to the ethics commission, basically it just stops the local government moving forward,” he said. “That’s just not how we operate.”

Tyndall, citing the Oct. 6 election, made a motion to table the appointment. The motion failed, with just Tyndall in support and Councilmen Dean Burrell, Elroy Brittingham and Gulyas opposed. Councilman Troy Purnell had recused himself prior to the discussion.

Burrell went on to make the motion to approve the appointment, which passed 3-1, with Tyndall in opposition.

“We all talk to who we talk to and we all move in different circles,” Burrell said. “However, I’ve been a member of this council for a while now, I have never been contacted by a candidate for a commission prior to Mr. Purnell. I think Mr. Purnell has shown interest and he brings expertise to this commission.”

Purnell, in an interview Tuesday, said he had experience in real estate and development that he thought would prove helpful to the planning commission.

“I’ve got some view points to offer that I think would be of value,” he said.

Purnell added that he lived in Berlin and planned to start a family here.

“I want to have a hand in the future of the town,” he said. “I don’t want to see it turn into Salisbury … I don’t want crazy sprawl, I don’t want 500 homes in Libertytown.”

He acknowledged the concerns citizens had voiced about his appointment but pointed out that the planning commission reviewed development throughout town, not just projects the Purnell family did.

“Yes I’m involved in our stuff,” he said. “I’ll recuse myself. I don’t know what else to say to calm people’s fears.”