OCEAN CITY — As a calm descends on Ocean City after another riotous pop-up car rally weekend, resort officials are now left pondering what worked in terms of enhanced law enforcement and what can be done better in the future.

As expected, the pop-up car rally weekend, as it is now being referred, brought huge crowds of largely unruly, disrespectful visitors that wreaked havoc on Ocean City for the better part of four days. The lawlessness built slowly throughout last week and reached a crescendo on Saturday night when two law enforcement officers were injured and well over 100 arrests were made.

Ocean City, its police department and its allied partners were perhaps as best prepared as ever entering the pop-up car rally weekend with an enhanced special event zone law, a beefed-up towing ordinance, speed bumps, altered traffic patterns, hundreds of police officers and all manner of equipment and resources on hand.

Those combined measures worked to a large degree for much of the weekend, but despite the thankless efforts of law enforcement and first-responders, the weekend can only be described as another unquantified disaster. As Ocean City and its partners ramped up enhanced enforcement efforts, the majority of the pop-up car rally enthusiasts ratcheted up their unruliness in kind.

It would be unfair to paint the entire group of weekend visitors with one broad brush, but the vast majority appeared to arrive with recklessness and lawlessness on their mind and for the most part, they achieved their desired results. Ocean City Police Chief Ross Buzzuro said as much in a statement on Sunday.

“This is not a car show and the majority of these visitors are not car enthusiasts,” he said. “They are here to disrupt, destroy and disrespect our community and our law enforcement officers. Our policing philosophy is to be friendly, fair and firm. Unfortunately, the disorderly behavior and unruly crowds left no choice but to shift our philosophy and take additional steps to protect our officers and our community.”

Final weekend statistics released on Monday provide a tale of the tape of sorts for what really happened over the weekend. For example, there were 277 total arrests over the weekend, including 127 on Saturday alone, compared to 85 over the same pop-up car rally weekend last year.

It’s important to note the General Assembly passed an enhanced special enforcement zone bill last winter that made certain violations under the umbrella of “exhibition driving” arrestable offenses in many cases. It’s also important to note many of the arrests recorded over the weekend had nothing to do with vehicles, but rather the blatant lawlessness of spectators on the sidelines.

In advance of last weekend’s pop-up car rally, the town of Ocean City beefed up its towing ordinance and the results of those efforts played out in the statistics. For example, there were 345 vehicles towed and impounded over the four-day period compared to just 65 for the same weekend in 2019. 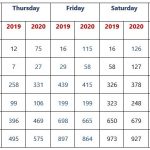 Interestingly, the total calls for service, both citizen-generated and officer-generated, were down slightly from just around 2,900 last year to about 2,800 this year. However, with hundreds of allied law enforcement officers on the streets all weekend, the lawlessness and disorderly behavior was right in front of them and they didn’t necessarily have to respond to calls for service.

The unsanctioned pop-up car rally weekend is largely a social media-driven event without a specific promoter or organizer. There are multiple social media pages and sites through which the vast majority of attendees communicate and coordinate. Even the administrator of one of the more popular social media pages acknowledged in a message this year’s event got out of hand.

“The events of this weekend have gone beyond traffic infractions at a car rally,” the message reads. “This year’s activities have caused great harm to local business owners the local community and some have even promoted causing harm to law enforcement who put their lives on the line every single day to protect the community.”

The administrator of one of the many pop-up car rally social media sites acknowledged the level of lawlessness and disruptive behavior has reached levels never anticipated or desired.

“This has gone too far,” the message reads. “H2Oi was once a peaceful event that promoted a shared love of cars and has now evolved into something else that is nothing to do with cars and instead promotes general lawlessness. In the strongest possible terms, we condemn this activity and the harm it has caused to so many in Ocean City. We disavow this behavior and will not be allowing any posts that support this activity.”

State Delegate Wayne Hartman (R-38C), who represents Ocean City and Worcester County, was on the front lines for much of the weekend, riding along with the Ocean City Police Department on Friday and the Worcester County Sheriff’s Office on Saturday. Hartman said in a taped message on Sunday what was displayed in pictures and videos of the unofficial event did not do it justice.

“It’s hard to describe and hard to imagine what happened in Ocean City and how intense it was and the magnitude of it,” he said. “It was typical for 12 to 15 law enforcement officers to be dispatched to a particular site to disperse crowds. More often than not, those law enforcement officers were met with rocks, water bottles, beer cans and fireworks being shot at them.” 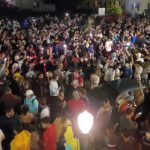 Hartman, who was instrumental in getting the enhanced special event zone legislation through the General Assembly last winter, vowed to go back to the drawing board this year.

“It’s important to realize even with everything that was done and the help of the new law and changing the habits of the drivers, still more needs to be done,” he said. “There was a rumor that the governor was here and that was just a rumor. I assure you I will share with the governor my first-hand account. In the meantime, I want to introduce in the Maryland General Assembly a bill to allow our law enforcement officers and first-responders to be protected under a hate crime bill and make them a protected class. That would be an additional tool that law enforcement would have next year. When they are met with this kind of behavior, it could be treated as a hate crime because that’s just what this is.”