OCEAN CITY – Since 1970, Golden Plate has served generations of locals and visitors.

In its earlier years, the eatery was located at the 33rd Street plaza. There, founder Adil Yilmaz built a successful business selling pizza, subs and kabobs, among other things.

“It was the first business he opened up in Ocean City after he emigrated from Istanbul, Turkey, came to New York, and held a job in D.C. working at the Turkish embassy as a chef,” said Yilmaz’s granddaughter Yesim Karaman. “He and his wife came to vacation in Maryland and he fell in love with Ocean City. That’s how he got his start in Ocean City and decided to be here.”

Yesim noted that Golden Plate was a hangout for many locals during its time on 33rd Street. She said couples would go there for dates, and customers would flock to the eatery after visiting the Paddock nightclub.

“Anyone you talk to that’s local will always say, ‘After the Paddock we’d go to Golden Plate and have subs and pizza … and if we drank too much he’d whip out his roller and chase us around,’” she said. “Just crazy stories of this old immigrant dude.”

After years on 33rd Street, Yilmaz ventured into other businesses, operating the House of Pasta and the Tides Inn restaurant. But in the late 1990s, Yilmaz’s daughter, Yasemin Karaman, reopened the family business from a concession stand at the corner of 1st Street and the Boardwalk.

Today, Yasemin, her husband, Ali, and their two daughters, Yesim and Yagmur, continue to operate Golden Plate, albeit with a different menu.

“The first couple of years we tried keeping some of the staples, like the shish kabob subs and the rice pudding, but the Boardwalk clientele was very different …,” Yesim said. “We quickly had to adapt.”

In the decades since its Boardwalk opening, Golden Plate has established itself as a go-to destination for locals and visitors alike. And despite the COVID-19 pandemic, Yesim said business remains strong.

“This pandemic has certainly been our biggest challenge …,” she said. “But luckily we’ve still had a great summer. We’ve still seen a lot of repeat customers and new customers who weren’t able to travel as far.”

This year, however, Golden Plate has had to contend with staffing shortages in the wake of the pandemic. While she works full time for Gov. Larry Hogan’s administration, Yesim is also helping her family manage the business during the summer months. 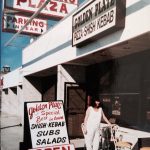 “We usually have a 12- to 13-person operation, and we’re running it with just the four of our family members,” she said. “We have one guy who’s full time, but we just hired him after the Fourth of July.”

Regardless, Yesim said she and her family remain grateful for those who continue to patronize Golden Plate year after year.

“At the end of the day, we’re all working hard to make Ocean City the best visitor destination it can be,” she said.

Now in its fifth decade of operation, Yesim said the family has no plans of stopping. Her sister, Yagmur, hopes to one day run the business.

“Every year my dad teaches me more and more,” Yagmur said. “I think it’s cool because my granddad started it, and my mom carried it on along with my dad and my sister. It’s cool to think that one day when I have a family hopefully they can carry it on as well.”