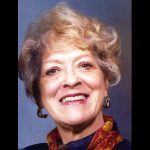 Born 1935 she was a proud native Washingtonian and was a graduate of Buchanan Elementary and Eastern High School. In the 1950’s, she was a draftswoman and engineering assistant for the Telephone Company before leaving to devote herself to raising her family. And she greatly encouraged her children’s every athletic, artistic and musical endeavors.

With her husband she travelled the world until they retired to Ocean Pines where she enjoyed all Delmarva had to offer. She was a member of The Garden Club, The Women’s Club and The Republican Women’s Club. And she greatly enjoyed her art, her crafts, her garden, Mahjong, antiques and her friends.

She is preceded in death by her husband William; sons Michael and Patrick; parents Harold and Corinne Miller; and brothers Fred and Robert Miller.

Friends may call on Tuesday Sept. 8, 2020 from 4-5 p.m. Services will begin at 5 p.m. at the Burbage Funeral Home in Berlin. Masks will be required.
Interment will take place at Arlington National Cemetery, time and date yet to be announced. 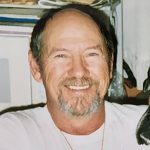 Mr. Hill, a decorated veteran, had served in the United States Army (Germany) and continued his service in the reserves for several years. Gifted mechanically, he enjoyed working on small motors. He also was a mate on the charter boat “Three K’s” owned by Dick Webster. His love for fishing made baiting hooks and untangling fishing lines all the more fun. Socializing was a natural thing for him whether it was going to play bingo, or dressing up for Halloween, he loved being with his family and friends.

Cremation followed his death. A celebration of life will be announced at a later date. A donation in his memory may be made to Coastal Hospice, P.O. Box 1733, Salisbury, Md. 21804. Letters of condolence may be sent via: www.burbagefuneralhome.com . Arrangements are in the care of the Burbage Funeral Home in Berlin. 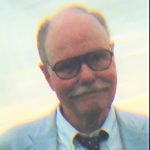 He was preceded in death by his parents, Alice Marie and Harry Piper, and is survived by his beloved daughter, Sarah Piper Niegenfind, his son-in-law, Keith Niegenfind, and his grandchildren, Lauren and Margaret.

Eric was born in Washington, DC and raised in Prince George’s County. After graduating from the University of Maryland, he continued to live in Prince George’s County and worked as a dental technician. He also worked as a veterinarian assistant at the Hyattsville Animal Hospital, where his love of animals shone through.  In 2005, he relocated to Worcester County. He lived in Snow Hill and Ocean City before moving to Gull Creek in Berlin. He loved living at Gull Creek and made many new friends there.

Eric was a gentle spirit and known for his compassion and generosity. Much of his life was spent hiking the Chesapeake Bay beaches and collecting fossils of every size from every species. He was a talented photographer and an artist, creating many paintings, drawings and prints. He also used his artistic talents to create jewelry out of the items he collected from the beaches, and his skills with metal work helped him excel as a dental technical. Eric was a huge booster for Maryland, especially the blue crabs and oysters. He traveled the world for adventures and always enjoyed visiting family. Of all his achievements, he was proudest of his daughter, Sarah, and her family. 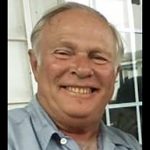 Born in Berlin, he was the son of the late Mary Louise Taylor Lynch. He is survived by his wife of 35 years, Julia Smith Lynch, and children, Thomas T. Lynch, Jr, Michael Lynch, Anthony Lynch, all of Berlin, Patti Caudill and her husband Barry of Timonium, and Nanci Savage and her husband John of Bishopville. There are five grandchildren, Brian and Adam Savage, Caitlin, Bailey, Kristin Bailey Lyman, Nicholas Bailey, and two great-grandchildren, Kinley and Willa Lyman. Also surviving, is his brother, Jessie Lee Lynch of Longneck, Del., and many nieces and nephews. He was preceded in death by his brother, Charles H. Lynch, Jr.

Mr. Lynch had worked as a construction contractor for 40 years. He was a member of Buckingham Presbyterian Church, a retired Berlin volunteer fireman, and member of the Berlin Jaycees. He enjoyed hunting and fishing with his Uncle Tom Taylor and spending time with his family. He leaves behind his special friends, dogs Baron and Chase.

Cremation followed his death. A celebration of life was held Tuesday, Sept. 1 at the Lynch home in Berlin. A donation in his memory may be made to the Worcester County Humane Society, P.O. Box 48, Berlin, Md. 21811. Letters of condolence may be sent via: www.burbagefuneralhome.com . Arrangements are in the care of the Burbage Funeral Home in Berlin. 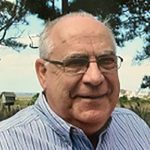 Born at a US Army base in Germany, he was the son of the late Paul and Joyce Brown, and Louise and Charles King. He is survived by his beloved wife of 19 years, Sharon “Nikki” Brown, and children, Ryan Brown and his wife Vicki, Meghan Harp and her husband Jake, Elizabeth Cimetta, and his step children Nichole Divine, Charlie Hill and Nick Hill. Andy has five grandchildren. Also surviving is his brother, Doug Brown and his wife Barrie, as well as his step siblings, Kathryn, Charles, and James. He was preceded in death by a brother, Glen Brown, as well as his step siblings, Mardi and Shane.

Andy, a carpenter by trade, had been owner/operator of a construction business for over 30 years. He also worked as a commercial fisherman, and at one time, managed the Sea Spray Motel. He enjoyed cooking, boating, fishing and surfing. Andy will be remembered for his generosity and gregarious nature. He became a meaningful part of the lives of anyone that he met, and he will be missed.

Cremation followed his death. Details for the celebration of life will be announced at a later date. A donation in his memory may be made to SonRise Church (Addiction and Recovery) 10026 Main St. Berlin, Md. 21811. Letters of condolence may be sent via www.burbagefuneralhome.com Arrangements are in the care of the Burbage Funeral Home in Berlin.