“You hear it all the time. They say, ‘When we come to Ocean City, the first thing we have to do is get Thrasher’s,’” he said. “I’ve watched generations of families come up here. You remember when they were little kids, and now they are coming and bringing their kids.”

Morris has spent the past 44 years working at Thrasher’s. But the business’s history goes back decades further.

“It was right here in the Pier Building,” Morris said. “But the original location was different. It was more toward the center.”

But when the owner’s health began to decline, he sold Thrasher’s to Ocean City businessman Franklin Hastings, who moved the operation to its current corner location.

Following his death in 1974, Charles “Buddy” Jenkins purchased Thrasher’s. The business has operated under his ownership ever since.

“When Mr. Jenkins got it, that’s when it took off,” Morris said. “We expanded to three stores in Ocean City.”

Morris began working at Thrasher’s in 1977. And under Jenkins’s ownership, he was promoted to general manager in the early 1980s.

Morris admitted that many things have changed since that time. When he first started working, he recalled a small portion of French fries costing 75 cents, and business operating daily from Memorial Day to Labor Day.

“Now we’ll stay every day until the first of November, and I’ll reopen the first of April,” he said. “The last several years in March, I’ve only missed five or six days. It really feels like a year-round resort now.”

Morris noted, however, that some things remain the same. Thrasher’s continues to attract a line of customers throughout the summer, and its recipe remains unchanged.

“We cut the potatoes the same size and we use peanut oil,” he said. “That’s the key, we’ve never strayed from that. It’s 100% peanut oil and fresh potatoes.”

Morris noted that Thrasher’s uses more than 4,000 pounds of potatoes each day. Most spuds are brought in from Idaho.

“We usually get a truck load every week, and that truck carries 42,000 pounds of potatoes,” he said. “We roll them through all summer.”

While the recipe remains unaltered, Morris said certain aspects of the business have improved. Just last winter, for example, Thrasher’s underwent a 12-week renovation to replace aging equipment, remove a dividing wall and add another cashier station, among other things.

The business has also expanded over the years to include two additional locations – one at 2nd Street and another at 8th Street. 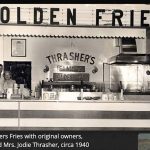 “It’s hard to run a place …,” Morris said. “You really need good people. And that’s been the key here. We’ve had some really good people.”

But that doesn’t mean Thrasher’s hasn’t experienced its share of challenges, Morris noted. He pointed to previous storm events, as well as recent staffing troubles caused by the COVID-19 pandemic.

“Who would have guessed in a thousand years what we were going to put up with this summer …,” he said. “We’ve had to have twice as many employees to cover the same shifts.”

Morris added that the business had to quickly adapt to social distancing and safety protocols. In the spring, Thrasher’s installed Plexiglas barriers and social distancing stickers and introduced vinegar pumps and individual salt packets.

“We ended up being a poster child for how to run business,” he said. “We were trying to follow guidelines nobody really gave us. We had done it ourselves.”

Despite recent challenges, Morris said business has remained steady. He attributed Thrasher’s’ success to operational improvements and an unwavering commitment to serving up the best French fries.