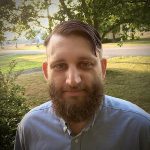 selected a new executive director. After an extensive process, the Board of Directors and Executive Committee have selected Nicholas Cranford to lead GOLD.

“I feel so fortunate for the mentorship Sandy provided,” said Cranford. “Her years of experience and leadership have been so beneficial to this organization and the community.”

With a background in education, technology and private business, Cranford hopes to use his skills to serve Worcester County residents in need. He lives in Newark with his wife, daughter, and two little dogs.

“I am beyond excited to continue my work with GOLD in this new role,” Cranford said. “I feel honored to be a part of GOLD’s rich history of service. With issues like unemployment, food-insecurity, and poverty currently on the rise, we need to rely on our strong partnerships more than ever to continue to meet the basic needs of the most vulnerable among us. As a small organization, we could never hope to address the growing level of need, but together, there is no limit to what we can accomplish.”

SALISBURY – Fisher Architecture LLC, a locally owned, experienced architectural firm providing functional design and construction solutions to clients, announced it has been awarded the New Construction Award for the Cambria Hotel at Cropper’s Landing on the site of the former Cropper concrete plant just north of the Route 50 Bridge.

“The OCDC appreciates the cooperation of the Cambria Hotel owners and its architectural firm, Fisher Architecture, during the planning and construction phase of this attractive hotel project,” said Glenn Irwin, executive director of the Ocean City Development Corporation. “In addition to bringing a new amenity to the downtown area, the large fiscal impact of this new project in terms of increased property taxes, room taxes, and employment opportunities will benefit all of Ocean City and Worcester County.”

When the Ocean City Planning and Zoning Commission approved the site plan for the reconfigured hotel, it allowed for the development to be moved from a north-south alignment to the center of the property. This helped expand the number of rooms, reduced the impacts on neighboring properties and on the downtown view. It also significantly minimized the square footage of lot coverage.

“We are honored to be recognized by OCDC,” said Keith Fisher of Fisher Architecture. “The unique coastal design of the Cambria Hotel highlights the local style and culture of one of our favorite beach towns. We know the experience visitors have at the Cambria will bring them back year after year.”

PCA Primary Care Salisbury, which was housed in the offices of Peninsula Cardiology Associates, will merge with Salisbury Family Medicine to create a new combined family care practice at a single location. Peninsula Regional Diabetes and Endocrinology will join them in the same building.