OCEAN CITY – Owner Don Timmons says not much has changed about Dumser’s Dairyland since it was founded more than 80 years ago.

“It’s all about the ice cream,” he said. “That’s all I can say. That’s our business, that’s what we’re known for.”

Dumser’s Dairyland has served generations of customers since its foundation in 1939, when Gladys Dumser started making homemade ice cream from a Boardwalk shop near Wicomico Street. The business featured four flavors – vanilla, chocolate, cherry vanilla and chocolate fudge – and the sweet treat was sold for a nickel a dip.

Gladys’s daughter, Bernie Cook, said her parents lived in Pennsylvania and would travel to Ocean City each summer to operate their Boardwalk stand, Bernie’s Dairyland, which was named after her father.

“My father used to make the fudge by hand …,” she said. “Then at the top of the cans they’d put extra fudge. That first dip, oh man it was good.”

Following a divorce, Gladys married Peter Dumser and the business was renamed. Cook said she and her two sisters worked the Boardwalk stand each season, and the family continued to expand its menu.

“We didn’t have those cash registers like we do now,” she said. “[My mother] would teach everybody how to count change before they started working the Boardwalk. She made me a cashier when I was 8 years old because I couldn’t reach the cabinets.”

Unlike today, Cook said business in those earlier years operated from Memorial Day to Labor Day. Shops were run by families, and the Boardwalk did not have as many visitors.

“Back in the 40s, when I was two, my mother tied me to the bench next to the store with this really long rope that could reach across the Boardwalk. She didn’t want me to run away, but not a lot of people passed by …,” she said. “You could run a bowling ball down there at the time and you would never hit anybody. It was bare.”

In 1972, Dumser’s opened a second, freestanding location at the Inlet parking lot. By that time, a third generation of family members had joined the business.

Gladys sold Dumser’s to Timmons in 1981, after children and grandchildren decided to pursue other opportunities. Timmons – an Ocean View, Del., native – was no stranger to the Boardwalk. He worked at Dolle’s Candyland eight years before taking over operations at Dumser’s.

“She stayed on about two years and helped me a lot …,” Timmons said. “The main thing we had in common was we both loved the business. Ice cream is a good, clean business.” 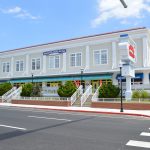 Over the next two decades, Timmons would go on to expand the Dumser’s operation, adding new stores at the Boardwalk, in uptown Ocean City and along Route 50 in West Ocean City.

“My mother couldn’t believe it when she went into the restaurant at 123rd Street,” Cook said. “She had nothing to do with that, but she had her picture taken … She was so proud of what he did.”

Today, Dumser’s boasts seven locations. At the store’s original Boardwalk location near Wicomico Street, ice cream is still made on site using the same machine installed in 1968. The remainder of the ice cream is made at the Dumser’s factory on the corner of Worcester Street and South Philadelphia Avenue.

Timmons said the ice cream is made using a special formulation, fruit flavors are made with fresh fruit, and brand names are used for toppings and ingredients.

“The peanut butter is all Jif peanut butter. The Oreos are Nabisco Oreos. The same with all the other ingredients we put in,” he said. “It’s all the best we can buy.”

While much has changed about Ocean City, Timmons said the business remains the same. For example, most flavors featured on the menu were crafted by Gladys herself.

“Dumser’s hasn’t changed much since Mrs. Dumser put her life into it,” he said. “It’s all about her. She had the savvy to make it what it is. I’m just trying to carry it on.”

In addition to his employees and management team, Timmons is joined in the business by his wife, three daughters and two sons-in-law. He said his hope is to keep the business in the family for generations to come.

“It’s just a family business right now, and everybody has an input,” he said.

When asked if there were any plans to expand the business, Timmons noted he wanted to keep Dumser’s a local establishment.

“It’s not about making changes, it’s about keeping the status quo …,” he said. “We like being a part of Ocean City.”