ASSATEAGUE — The arrival of the Fourth of July weekend, along with one individual who this week thought it was a good idea to actually mount one of the horses at Assateague provides a good opportunity to remind the public the island’s most famed residents are wild and potentially dangerous and should be given plenty of space.

On Wednesday, a frequent visitor to Assateague came across a group of young men petting two stallions near their vehicle along the roadside on Assateague. The concerned visitor reportedly advised the young men the horses are wild and can bite and kick, telling them about the 40-foot rule for giving the wild horses plenty of space.

The young men asked the visitor what they should do when the horses walk right up to humans and the concerned visitor told them it was best to walk away and avoid interacting with them. One of the young men reportedly said he worked on a ranch and knew how to handle horses. The visitor left the area and returned a short time later to find the “ranch hand” riding on the back of one of the stallions.

The incident on Wednesday provides the perfect backdrop for a primer on how visitors can and should enjoy the famed wild horses from afar and give them plenty of space. It’s important to note the horses are wild animals, despite the illusion oftentimes they are somewhat domesticated and tame.

Nonetheless, they can be dangerous and will bite and kick their human guests on occasion when provoked or startled. Members of the herd that frequent the developed areas of the barrier island in around the public beaches and campground areas have become increasingly familiar with their human guests and will often mosey through camp sites and beach set-ups looking for human snacks to supplement their natural, wild diet, sometimes with tragic consequences.

In addition, some members of the herd are known to frequent the roadways in the developed areas near the entrance to the barrier island, also with tragic consequences. About once a year, one of the famed horses will get struck by a vehicle and rarely recover from the injuries. As a result, speed limits have been reduced and speed bumps have been added in those areas in recent years.

Some of the horses have become less and less afraid of their human guests, but petting and feeding them can cause abrupt and harmful behavior changes in the wild animals. The horses will often approach cars and visitors and have become increasingly aggressive over the years. The minimum legal distance is 40 feet, or about the length of an average bus, but even that distance might be too close under certain circumstances, according to the NPS guidelines.

While searching or begging for human food, the wild horses will often grab objects from visitors to close to them, bite at clothing and hands, push visitors away from open trunks, car doors and picnic tables. 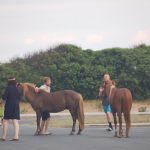 They are also known to tear into tents and coolers and picnic baskets. In 2017, the Assateague Island Alliance, a friends group of the Assateague Island National Seashore, which advocates on behalf of the wild horses, launched the “A Fed Horse is a Dead Horse” campaign to address the problem of the wild horses gaining access to food and other supplies brought onto the barrier island by residents, campers and beachgoers.

While the wild horses getting into human food on the barrier island had long been a problem, a particularly tragic incident in 2017 served as the catalyst for AIA’s “A Fed Horse is a Dead Horse” program. In the summer of 2017, the popular horse Chama Wingapo died after ingesting a large amount of dog food. The rich food caused an impaction which caused the horse’s intestines to rupture.

The first phase of the program included distributing nylon cooler straps to campers and beachgoers to allow them to safely secure food and other supplies and discourage visits from the wild horses. The second phase included the installation of safe food picnic tables in the areas around Assateague most often shared by visitors and the wild horses. The tables include closable storage areas under the dining surface, allowing food to be kept away from the curious and hungry wild horses.