Each morning, King and his employees at King’s Cotton Candy Stand begin the first shift of the day stocking shelves, making candy apples and preparing for the influx of customers that flock to the Boardwalk.

“It’s a grind,” he said. “Things pick up in the middle of April and go to the middle of October. It’s like six months where we’re open every single day.”

For King, the family-owned business is a labor of love. For decades, he has spent each summer season behind the counter doling out carnival-inspired treats to locals and visitors alike.

“I didn’t go to college,” he said. “Getting a proper job wasn’t something I did. I always worked in the store.”

King’s maternal grandparents, Billy and Agnes Heaton, opened their Boardwalk concession stand – located near Wicomico Street – in 1944. It was there that the couple built a business serving caramel corn, taffy, fudge and more.

And after his grandfather passed away in the early 1950s, King said his parents took over the operation, adding candy apples, snowballs and cotton candy (sold for 15 cents) to the menu and replacing caramel corn with other food items.

“My parents had three kids, and we all grew up in this store,” he said. “I have pictures of me sitting on this counter when I was six months old. Now I’m 65, so I’ve been here a long time.” 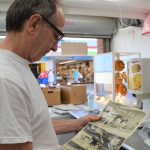 King is pictured looking at pictures of his grandparents who started the business in 1944.

When they were old enough, King and his two brothers started working alongside their parents. And when his mother died in 1985, he and his brother Fred kept the concession stand going.

“We ran the store for 25 years as partners until he also passed about 10 years ago,” he said.

These days, it isn’t uncommon to see King’s wife and three children at the concession stand on busy days. The family is also joined by King’s son-in-law, Bishal Poudel, as well as a team of hardworking employees.

“Every year they come to Ocean City, they come here,” he said. “They want their job back because they like working here.”

When asked how business has fared during the COVID-19 pandemic, King said sales have improved since the earlier weeks of the summer season. During Memorial Day weekend, he noted sales were less than half of what was typical.

“It started out terrible …,” he said. “And we were thinking ‘Is this what it’s going to be like all summer?’ But things have gotten better.”

However, King said labor shortages and rent relief remain key concerns among many Boardwalk operations this summer. He noted owners rely on summer profits to get through the winter months.

“Even though we’ve been here a long time, we still pay a lot of rent,” he said. “You’ve got to be busy because by the time you pay your rent, pay your help, pay your stock and taxes, and this and that, next thing you know it’s the end of the summer and you are wondering, ‘I hope I have enough to get through the winter.’”

Despite setbacks earlier in the season, King said he is happy to be back in business.

“I love being here,” he said. “There are guys that can tell you how many days there are until Labor Day because they can’t wait to get the season over with. I’m just the opposite. I like coming up here, looking at the ocean every day, being at the beach and watching the people go by. It feels good.”

King said he will continue to operate the concession stand for the foreseeable future.

“We’ll see what happens,” he said. “I’m going to continue here and grind it out as long as I can.”