Around 5:30 a.m. last Friday, Ocean City Police Department (OCPD) officers responded to a midtown hotel for a reported stabbing incident. Upon arrival, officers located a male victim who had two stab wounds, one to his abdomen and one to his face, which were bleeding profusely, according to police reports. The victim was transported to Peninsula Regional Medical Center in stable condition, but needed surgery to repair the injuries.

OCPD officers located the suspect, identified as Dalton Rowles, 23, of Sherman’s Dale, Pa., in the hotel parking lot. Rowles had attempted to flee, but was detained by first-arriving officers. According to police reports, Rowles had blood on his clothing and body and also had a cut on his hand and scrapes on his arm. 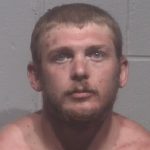 When the victim exited the bathroom, Rowles reportedly stabbed him in the abdomen and face. The two men continued to fight until a third couple, which was outside the hotel room, entered and separated the two men. Rowles reportedly fled the scene, but was detained by first-arriving OCPD officers.

Rowles was arrested and charged with first-degree assault. During a subsequent interview, Rowles reportedly told police he and the victim had been arguing off and on for a number of days. Rowles told police when he was banging on the bathroom door in an attempt to get the couple to come out, he had threatened to kill the victim and admitted that he stabbed the victim when he exited the bathroom.

Rowles was charged with first- and second-degree assault and reckless endangerment. Following a bail review hearing on Monday, Rowles was ordered to be held without bond. A preliminary hearing has been set for July 27.

Around 2:50 a.m. last Sunday, Ocean City Police Department (OCPD) officers arrived and found a male victim with a towel covered in blood wrapped around his right forearm. The victim told police he had been standing on the corner of Sunset Avenue when he was approached by an unknown assailant with a knife who attempted to take his wallet.

At the residence, OCPD officers observed fresh drops of blood on the floor of the porch and more blood smeared on the siding and the door of the unit. The officers asked for and was granted permission to enter the unit to talk with the victim’s mother and girlfriend. Once inside, the officer observed more blood droplets on the floor throughout the unit, according to police reports.

OCPD officers interviewed the victim’s mother, who provided an account of the events leading up to the alleged stabbing. The witness said Byrum-El grabbed a knife from the kitchen and went to the front porch where the victim was with his girlfriend. The witness told police Byrum-El and the victim were arguing on the porch as she watched through the open front door.

Last Sunday morning, a man identified as Derek Andrews, 36, of Duquesne, Pa., arrived at Ocean City Police Department (OCPD) headquarters at the Public Safety Building and reported his girlfriend, identified as Jennifer Vargas, 33, of Brownsville, Pa., had stabbed him during a domestic incident that had just occurred. Andrews told police he and Vargas were in Ocean City on vacation and were staying at a midtown condo.

Andrews told police he had been in an argument with Vargas over a missing cell phone when Vargas pulled a kitchen knife out of a drawer and told Andrews, “I’m going to stab you,” according to police reports. Vargas reportedly continued to shout that she was going to stab Andrews and held the knife pointed directly at him within an arm’s length, or about three feet, away from him.

Andrews told police he believed Vargas was going to stab him and feared for his life. Andrews reportedly told police he attempted to wrest the knife away from Vargas during which he received cuts on his fingers and the palm of his hand. Andrews was able to get the knife away from Vargas, but she continued to fight with him as he attempted to get his car keys so he could leave the area.

Andrews told police at that point he had to grab Vargas around the shoulders and neck area in an attempt to keep her from attacking him, according to police reports. During that portion of the incident, Vargas reportedly bit Andrews on his left wrist and right triceps.

Andrews was able to find his car keys and leave the condo and traveled to the Public Safety Building to report the incident to police. OCPD officers located Vargas to get her version of the story. According to police reports, Vargas told the officers the couple had been arguing about a missing cell phone and that Andrews had pushed her.

Vargas reportedly told police her friends had told her in the past to get a weapon if Andrews threatened her. She admitted getting a kitchen knife during the argument and threatened to stab Andrews before the couple scuffled and Andrews was able to get the knife away from her.

Vargas reportedly told police Andrews then grabbed her neck and the officer observed fresh bruising on her neck consistent with her story. Vargas told police Andrews pushed her to the ground several times and then left the area. All in all, Vargas was arrested and charged with first- and second-degree assault. Andrews was also charged with second-degree assault for continuing to fight with Vargas when he had an opportunity to leave the area.