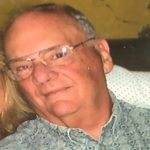 He was a loving and devoted husband to Lynn Hall for 64 years. He is survived by his wife and two daughters, Elaine Hall of Odenton, Md. and Vanessa Robertson and her husband Don of Ocean City. He was preceded in death by his parents, Elizabeth Alban Hall and Melville Hall, Sr.

As a young man he served in the Naval Reserves for eight years before joining the Baltimore City Police Department. While in the BCPD he was a patrol officer earning the rank of Sergeant. Later, he became a civilian with the BCPD and was the Director of the Crime Analysis Department until his retirement. After retirement, he and Lynn moved to the Berlin/Ocean City, area where he became the owner/operator of SeaGail Maintenance and Construction until his second retirement.

He was an active attendee and member of Coastal Community Church in Berlin, MD where he served as lead usher and communion attendant for many years. He loved to work with his hands. He could often be found tinkering with anything that needed to be fixed and providing handyman help around the house and around the community. Anyone who knew him, knew he took pride in the appearance of his vehicles, always keeping them looking like they came off the showroom floor. After his second retirement, he enjoyed breakfast on most Wednesdays and Saturdays with “the guys” as they would sit and solve all the world’s problems over coffee. He lived a full life and was a solid, kind man of integrity. His was a life of service to others. He was well loved and will be missed by many.

In lieu of flowers, the family requests that donations in his name be made to the Coastal Community Church Benevolence Fund, 10900 Ocean Gateway, Berlin Md. 21811 or charity of your choice.

Arrangements are in the care of Eastern Shore Cremation and Funeral Service, 504 Franklin Avenue, Berlin, MD 21811. To send condolences to the family, please visit www.easternshorecreamtion.com