OCEAN CITY –   Local businesses not yet allowed to reopen showcased their efforts to ensure safety and enforce physical distancing to Congressman Andy Harris this week.

On Monday, Harris visited a handful of businesses between Delmar and Ocean City to view the changes proprietors have made as they eagerly await permission to reopen. He’s hopeful that more Eastern Shore businesses will be allowed to reopen as protocols to ensure customers remain safe have been put in place. He pointed out that many of the same industries that remain closed in Maryland resumed operations in neighboring Delaware on June 1.

“It does not make a lot of sense,” he said. “We’re sending revenue to Delaware.”

Harris on Monday visited Kylan Barn in Delmar, Ocean Downs Casino, Baja Amusements, the Bay Bee headboat, Old Pro Golf and The Hobbit Restaurant. Proprietors showed him the safety improvements they’d made to ensure physical distancing and shared their frustration from watching their competitors just across the state line open. Old Pro Golf’s Scott Schoellkopf said he was eager to get the state’s permission to open, especially since some of his competitors were already accepting customers.

“Some have gone rogue,” he said. “I’m trying to do the right thing.”

In addition to disinfecting club handles and golf balls, Old Pro Golf has put together procedures to ensure people keep their distance while playing. The game is also outside for the most part and is played by groups that visit the establishment together. If the course is too busy, clerks can adjust the influx of players.

“We can control it from the point of sale,” Schoellkopf said. “We can slow it down.”

Senator Mary Beth Carozza, who along with Delegate Wayne Hartman and State’s Attorney Kris Heiser, accompanied Harris on his visits Monday, said she was hopeful miniature golf would be allowed to open this week.

“This is an outdoor activity with very strong health, safety, sanitation and social distancing protocols in place,” she said, adding that she wished it had been able to open Memorial Day weekend. “If you could break up the congregation on the Boardwalk and give visitors additional activities like outdoor restaurant seating and outdoor miniature golf that’s a far healthier scenario than having the congregation on the Boardwalk.”

Hartman said he was hopeful that Gov. Larry Hogan would allow indoor dining and outdoor entertainment activities to resume this week.

“All the businesses on the tour today are businesses we feel can be opened safely,” he said.

Like Harris, he stressed that similar businesses just over the state line were now open in Delaware.

“If Governor Hogan doesn’t open these businesses, Marylanders are going to partake of these same venues in Delaware without us having any of the financial gain which makes no sense,” Hartman said. “People have been compliant, they did what the governor asked, and now I think it’s time that these businesses are given the ability to open and salvage what’s left of their business and season.” 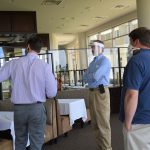 The Hobbit owner Garvey Heiderman, left, shows Harris and Hartman the new measures his bayfront restaurant has taken in recent months to prepare for the return of indoor dining.

At the Hobbit, owner Garvey Heiderman has installed plexiglas between booths and rearranged tables to ensure that patrons don’t get too close to one another. Because the state is now allowing outdoor dining, he’s also set up temporary tables outside the restaurant. Last weekend, with 21 tables outside, Heiderman said the restaurant did 65% of the business it did during the same weekend last year with its 35 indoor tables.

“I was pleasantly surprised,” he said.

Heiderman said he even purchased face masks so the restaurant could provide them to diners who arrived without them.

“I expected people not to know,” he said. “People are still extremely confused.”

Heiderman believes businesses in Ocean City need to be vigilant with face covering so that visitors feel safe when they come to the resort. He says if people who do come to Ocean City feel uncomfortable they won’t be coming back.