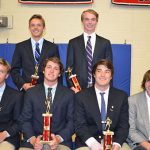 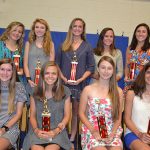 • Fresh off a strong performance in the state 3A-South regionals, a handful of Stephen Decatur varsity track athletes this week competed in the state championship meet in Baltimore with solid results.

At the state championship meet last weekend, the Decatur pole vaulters were solid again with Kim taking seventh, Chun taking 10th and Haas taking 11th. On the girls’ side, Hofman was 11th and Wilson was 12th. In the boys’ 110 hurdles, Decatur’s Sean Velasquez-Alvino finished 10th overall in the state meet. Parker Harrington finished 15th in the 800 in the state championship meet, while Bethany Williams finished 16th overall in the long jump.

• Two days after winning the state 3A-2A region championship, Stephen Decatur’s girls’ varsity lacrosse team’s dread of a possible state championship ended with a 12-9 loss to North Harford in the state semifinals. The Seahawks cruised to the regional championship, beating Patuxent, 14-3, to earn a trip to the state’s final four.

Decatur got off to a fast start against North Harford in the semifinal game and led 5-1 just five minutes into the contest. North Harford regrouped, however, and reeled off nine straight goals to take a 10-5 lead at the half. Decatur rallied again, cutting the lead to 11-9 with over 10 minutes left in the contest, but North Harford added a late goal to close out the game at 12-9. The loss did little to tarnish what was another remarkable season for the Decatur girls, who finished with a 14-4 record and won the Bayside South championship before earning the top seed in the state 3A-2A tournament.

Maddie Justice was her usual dominating self against River Hill, allowing just one hit and two runs while striking out 11. Kylie Nottingham provided the offensive spark with a home run and three RBIs, while Jessica Iacona collected two hits and scored twice.

The win over River Hill propelled Decatur into the regional championship game against Howard with a trip to the final four and a possible state championship on the line, but the Seahawks fell to Howard, 4-1. Decatur finished with an impressive 17-3 mark on the season including a 14-2 record in the Bayside South.

• Decatur’s boys’ varsity lacrosse team fell to old nemesis Kent Island, 14-2, in the state 3A-East region semifinals. The Seahawk were in a rebuilding mode in 2010 and finished the regular season with an even 7-7 mark. Decatur earned the six-seed in the 3A-East region tournament and breezed by Bayside South rival Wicomico, 17-1, in the post-season opener to advance.

Looming in the second round, however, was Bayside Conference champion Kent Island, which had Decatur’s number in recent years. Kent Island jumped all over the Seahawks early and led 5-0 after one quarter and 8-0 at the half. The Buccaneers led 11-0 late in the third before Decatur finally got on the board with a goal by Brandon Terlizzi. Kent Island added a couple of late goals and cruised to the 14-2 win. Decatur entered the season with modest expectations after losing the core of its senior leadership the year before, but with a roster loaded with underclassmen, the future looks bright for the Seahawks in the years to come.

• Decatur’s varsity baseball team fell to Atholton, 7-1, in the state 3A-East region semifinals, closing out what was otherwise a remarkable season for the Seahawks. Decatur finished the regular season with a 15-3 record and entered the region tournament as the number-two seed. In its post-season opener, Decatur rolled past Northeast behind a dominating pitching performance by Troy Bennett, who struck out nine. Brad Stiles provided much of the Decatur offense in one swing with a three-run homer while Marshall Betts also hit the long ball. In the region semifinals, Decatur ran into a buzz saw in a form of the Atholton starting pitcher, who allowed just one run and five hits through seven innings.

Ocean City’s offshore fishing season got off to a fast start when angler A.J. Thomas hauled in a whopping 245-pound mako shark, the earliest ever in the resort area at the time. Thomas’ big early mako touched off a frenzy early in the offshore season in Ocean City with several boats reporting double-digit shark catches. For example, the Crazy Horse with Captain Brett Reitz caught six blue sharks in the 110-200-pound range, while Captain Keith Richardson and the R&R crew caught seven blue sharks in the 200-pound range in a single day.