OCEAN CITY — The Boardwalk benches are staying right where they are after a spirited debate by a divided Mayor and Council this week about potentially removing or moving some of them to better promote social distancing.

During the weekly COVID-19 briefing on Tuesday, the Boardwalk benches provided the catalyst for a spirited philosophical debate about the town’s efforts to promote social distancing and the public’s responsibility to make good choices and police themselves. In the end, the majority of the council vote to leave the benches where they currently are and to remove the makeshift barriers installed on some to force social distancing.

Last week, Meehan voiced displeasure with the aesthetics of the hastily-installed bench barriers and recommended removing some benches or at least moving and separating them to better encourage social distancing. As a result, Public Works Director Hal Adkins and staff reviewed the options and sent a memo to City Manager Doug Miller and the Mayor and Council outlining a variety of reasons moving or removing Boardwalk benches was not practical.

For example, the current situation of boards and caution tape installed on all benches within six feet of each other has reduced the available seating, which could be contributing to the apparent lack of social distancing.

Adkins’ memo also addressed the issue raised last week about some of the benches being in disrepair and, therefore, incapable of being moved. He pointed out his department has a rigorous bench refurbishment program based on the age of the individual benches and straying from that structured program could come with considerable expense.

Adkins also pointed out the vast majority of the Boardwalk benches are purchased and owned by families and dedicated to loved ones. The locations of the dedicated benches are often tied to family memories and moving or removing them would likely be met with some backlash.

The memo also takes a piecemeal look at proposed options for moving and spacing out the benches including moving them to the east end of the tram lane or moving some to the west side of the Boardwalk and points out the logistical challenges of each option. In summation, Adkins memo recommended removing the existing boards and caution tape from some of the benches and that no benches be removed or relocated.

The memo points out that plan would maximize the availability of benches for individuals practicing physical distancing or make the adult decision to sit or not sit. It also points out many of the Boardwalk businesses operating in carryout mode relay on the benches for their patrons to sit and eat. As a result, the memo recommended not moving or removing any of the Boardwalk benches and instead recommended removing the current barriers including the boards and caution tape.

The Mayor and Council this week reviewed the public works department memo, which rankled Meehan. The mayor said the memo’s recommendations fell short of what he believed the town should be doing to encourage social distancing on the Boardwalk. 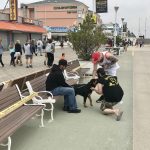 “I see a lack of foresight here,” he said. “I think we took the easy way, which is not the Ocean City way. Our businesses are trying to do the right thing and they are preparing for some kind of reopening. Here we have the Town of Ocean City not following the roadmap. We should be setting the example. Let’s move some benches and make sure we’re setting an example for social distancing.”

Meehan said public compliance is essentially a bell curve with 10% of the people always doing the right thing and practicing social distancing and wearing masks with another 10% on the opposite end who don’t care and won’t listen to any of the directives and guidelines. The vast majority, or that middle 80% in the mayor’s example, want to do the right thing and are looking for guidance on how best to do it.

“Opening those benches is not the right thing to do,” he said. “We had crews out there on Monday of Memorial Day weekend moving benches so they could remove sand on the Boardwalk, so we know it can be done. Some of the things I see defy logic. We need to lead by example so when those pictures are taken, they are showing the Town of Ocean City doing the right thing.”

Councilman Dennis Dares pointed out Ocean City got a lot of national and regional media attention over the holiday weekend for the apparent lack of social distancing on the Boardwalk and also urged moving or removing some of the Boardwalk benches.

“Does anyone really believe social distancing will be relaxed between now and October?” he said. “Why wouldn’t we make an effort to be in compliance with social distancing for the balance of the season? We made the national news this weekend for all of the wrong reasons and we’re asking for more negative publicity by not doing this. We should be setting an example with the things we can control. By moving the benches six feet apart, at least we can show we’re doing our part.”

However, Councilman Matt James said the town is setting the right example with its signage and marketing efforts regarding social distancing and the wearing of masks and ultimately it was the individual responsibility of the residents and visitors to do the right thing. For those reasons, James made a motion to remove the wooden barriers and caution tape and leave the benches where they are.

“We can still lead by example,” he said. “I don’t think that we need to continue to tell people how to live their lives. It’s time to stop trying to micromanage the situation,” James said.

Council Secretary Mary Knight said the Boardwalk benches and their proximity to each other was just a small part of a much larger challenge.

“As I sat up there this weekend, what I observed is we could have the benches 12 feet apart and you can still have somebody walk by you 18 inches away,” she said. “There is no way to get 360 degrees of social distancing up there. I think we should take the wood and the caution tape away and let people sit where they need to sit.”

“Social distancing is difficult on the Boardwalk,” he said. “You can be sitting on a bench and still have somebody walk within 18 inches of you. There are ways around it, but at the end of the day, people need to take their own precautions and do the right thing.”

Meehan remained adamant about his desire to remove or at least move some of the benches in the congested areas.

“What we’re doing now is not leading by example,” he said. “I think we can do better. I know this is a project that can be done and we’re capable of getting it done.”

Councilman John Gehrig took exception to the perceived slight to the public works department for its recommendations, saying the department does not get the same respect and recognition that some of the public safety departments get.

“You know who never gets the respect and prayers they deserve for the job they do? Our public works department,” he said. “Here we are railing against our public works crew. If we can move the benches, let’s move them. Let’s give them some direction and let them come back with some creative recommendations.”

James reiterated his position on the temporary bench barriers and personal responsibility in general.

“I don’t think they look good and I don’t think it’s effective,” he said. “If people don’t want to maintain a safe distance, they’re not going to do it. I think we need to stop babysitting people.”

Councilman Mark Paddack agreed with the need for personal responsibility in terms of distancing and wearing masks, for example. However, he did suggest moving benches where practical.

After considerable debate, the council voted 4-2 with Dare and Gehrig opposed on James’ motion to remove the temporary barriers and leave the Boardwalk benches where they currently are.

Paddack said there were some public misperceptions that the town is not doing everything it can to promote distancing and following the state directives.