• Stephen Decatur’s girls’ varsity lacrosse team’s bid for a state championship and a perfect season ended with a heart-breaking 10-7 loss to Baltimore-area powerhouse Century in the title game, but the loss did little to tarnish what was a remarkable season for the Seahawks.

Decatur entered the state championship game against Century as a decided underdog as the battle-tested Knights had been in the state final 11 times in the last 12 years. The Seahawks, meanwhile, were undefeated, taking on all comers throughout its remarkable season including a win over Queen Anne’s in the Bayside championship and a narrow win over another Baltimore-area power Hereford in the state semifinals.

For much of the first half, the two teams battled like a pair of heavyweights looking to expose each other’s weakness and look for an opportunity. The first half ended in a 5-5 tie, setting the stage for a dramatic finish. The game was tied at 7-7 with 8:30 left in the contest, but that was as close as the Seahawks would get to wrapping up a state championship and a perfect season. The loss was a tough one for the Seahawks, but did little to tarnish their remarkable season.

• Stephen Decatur’s varsity track teams turned in several strong performances in the state 3A South regional meet including a continued dominance in the pole vaulting events and another regional championship in the girls’ high jump. Decatur always produced champions in the pole vault and 2015 was no different. On the girls’ side, Katie Hofman finished first and Hannah Wilson finished second in the 3A-South regional. On the boys’ side, Decatur’s Brett Kim was first, Hyun Chun was second and Evan Hass was fourth.

• Powered once again by a strong outing on the mound by Maddie Justice, Stephen Decatur’s varsity softball team beat Bennett and was awaiting its opponent in the MPSSA 3A-East Region finals.

After having a first-round bye, the Seahawks got by James Bennett by a 5-2 score and defended their home turf with another win by the same tally.

Justice was masterful, striking out 11 Clippers and allowing two runs on just one hit. Kylie Nottingham led the way, hitting a home run, driving in three runs and scoring a run. Jessica Iacona had two hits and a run in the win. Decatur, the No. 2 seed, was awaiting its opponent in the region
finals. 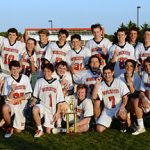 The previous week, the Mallards rolled past Gunston, 16-5, in the Eastern Shore Independent Athletic Conference championship game in what is typically the season finale.

In 2015, however, Worcester had one piece of unfinished business to dispense with in the form of Delaware powerhouse Salesianum. The Mallards took on Salesianum at
Wesley College in Delaware and came away with a tight 10-9 win. Senior
standouts Justin Butler and Brad Harris led Worcester with four goals each. Goalie Austin Gerachis was strong in the net, recording nine saves.

• It was not nearly as suspenseful as the road to get there, but Stephen Decatur’s girls’ varsity lacrosse team easily won the state 3A-2A East Region championship, beating Patuxent, 14-3 in the title game.

Prior to the regional championship game, Decatur endured a brutal rematch with archrival Parkside in the semifinals. The teams split two regular season matchups and the Bayside South championship came down to a coin toss with Decatur and Parkside tied atop the conference standings. Parkside won that coin toss and represented the Bayside South in the conference title game. Another coin toss determined who would get the top seed in the state’s regional bracket and Decatur won that toss and secured home field advantage. The Seahawks met the Rams once again and won the game in overtime, 7-5, to reach the region championship.

• Stephen Decatur’s varsity baseball team’s path to a potential regional championship became clear, but the Seahawks will likely have to get by an old rival to achieve the goal.

The Seahawks were rewarded for a highly successful 15-3 season with a number-two seed in the Class 3A-East region tournament and a first-round bye. Lurking on the other side of the 3A-East bracket, however, is Bennett, which was rewarded with the top seed in the region. Bennett handed Decatur two of its three losses this season, including a 3-2 defeat in the season opener and a 4-2 loss back on April 14. After the second loss to Bennett, the Seahawks reeled off 11 straight wins including a sweep of Crisfield in a double-header, before falling to Colonel Richardson in the regular season finale. With the number-two seed in the 3A-East region, the Seahawks will stay at home through the tournament until the regional final, which could match them up with top-seeded Bennett for the third time in the season.

For Worcester’s four seniors- Jessica Beckstead, Katherine Johnson, Elizabeth Raskauskas and Ashlee Reed- the conference championship win over Saints Peter and Paul put an exclamation point on remarkable academic and athletic careers at the Berlin prep school. Each of the four seniors had plans to play lacrosse at the next level the following year in college.

Beckstead, who recorded 18 saves in the goal for Worcester in the title game, was headed to Loyola College in Baltimore. Johnson was headed to Lehigh University, Raskauskas, who was named the first-ever MVP following the CWAC championship, was headed to Haverford for both lacrosse and field hockey, while Reed was taking her skills to American University.