• Stephen Decatur’s boys’ varsity lacrosse team fell to old nemesis Kent Island, 13-5, in the Bayside Conference championship game. Kent Island led 3-1 early, but Decatur battled back at cut the lead to 5-2 at the half. Decatur scored early in the third on a goal by Matt LeCompte to cut the deficit to just two goals at 5-3, but the Buccaneers reeled off six straight late in the game to pull away. The Bayside Conference championship game was a swan song of sorts for a special group of seniors who had played together since youth league including Will Hastings, Corey Gwin, Matt LeCompte, Jake Lathroum, Evan Heim, Matt Krall, Shane Moore, Connor May, Craig Snyder, R.J. Hayman, Dalton Warren, Miles Deppe, T.J. Scafone, Jackson Mumford and Colton Lohnas.

• Stephen Decatur’s girls’ varsity lacrosse team rallied late to beat Queen Anne’s, 9-7, to win the Bayside Conference championship and remain unbeaten on the season. The Seahawks were unbeaten entering the championship game and had beaten Queen Anne’s, 11-10, in overtime a couple of weeks earlier. The championship featured a game of big runs by both teams.

Queen Anne’s scored the first three goals of the game to take a 3-0, but the Seahawks scored the next six in a row to go ahead, 6-3. Decatur led 7-4 about midway through the second half, but Queen Anne’s battled back and tied the game at 7-7 with around nine minutes left. Ally Beck took the ball the length of the field, looped around behind the Lions’ goal and scored with seven minutes left to put Decatur ahead for good at 8-7. Blair Yesko punctuated the win with an insurance goal to seal the conference championship for the Seahawks. Payton VanKirk led the way with three goals, while Beck and Yesko scored two each. Lexi VanKirk and Elle Bargar each scored single goals.

• Stephen Decatur’s varsity baseball team lost a tough one in the Bayside Conference championship, falling to Colonel Richardson, 1-0 in the classic pitchers’ duel. The Seahawks had lost just once all season, while the Colonels went undefeated at 19-0, setting up a heavyweight battle in the conference championship game. Colonel Richardson starter Caleb Johnson was dominating through most of the game, allowing just two hits and no runs while collecting 12 strikeouts. Decatur starter Sean Colgan was equally impressive, allowing just two hits all day including none through the first three innings. The lone and deciding run came in the top of the fourth when a Colonel Richardson player walked to lead off, worked his way around the bases and scored without the benefit of a hit.

• Worcester Prep’s boys’ varsity lacrosse team cruised past visiting Delmarva Christian, 14-1, in the Eastern Shore Independent Athletic Conference (ESIAC) tournament semifinals to reach the championship game. The Mallards left nothing to chance and scored early and often against the Royals. Worcester led 12-0 at the half behind a five-goal first-half outburst by Brad Regan. Justin Butler scored three goals in the first half alone and Worcester got single tallies from Brad Harris, Alex Ternahan, Jake Emche and Jeff Andresen. 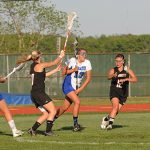 Decatur’s Bethany Howe works the ball against the Bennett defense in a Seahawk win over the Clippers this week 10 years ago.
Photo by Shawn Soper

• Stephen Decatur’s varsity baseball team stayed on a major roll, trouncing visiting Queen Anne’s, 11-1. Decatur scored three runs in the first inning and added a fourth in the third inning on a solo home run by Chris Bunting. Queen Anne’s kept the game tight early on, but the Seahawks sent 12 men to the plate in the bottom of the fourth and when the marathon around the bases ended, Decatur led 11-1 and the game was shortened in the fifth inning by the slaughter rule. Contributing at the plate in Decatur’s big fourth inning were Mike Newcomb, Troy Bennett, Marshall Betts, James Rossi, Mike Baglieri and Josh Tyndall.

• Stephen Decatur’s varsity softball team used a nine-run third inning to open up an otherwise close game against Queen Anne’s and routed the Lions, 14-1. Decatur led 3-1 starting the home half of the third 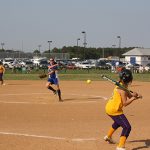 Decatur’s Amanda Parsons delivers a pitch during a game at home this week 10 years ago.
Photo by Shawn Soper

inning, but the flood gates opened for the Seahawks, who scored nine runs in the frame. A double by Amanda Parsons and triple by Emily DiNardo opened the inning and the hits kept coming for the Seahawks. Among the Seahawks participating in the hit parade were Maddie Justice and Katie Colgan.

• Worcester Prep’s girls’ varsity lacrosse team beat Gunston, 17-6, in the ESIAC semifinals to reach the championship game. The Mallards led 8-4 at the half, but scored eight straight goals to start to second half and settle the issue. Molly Dickerson and Sara Noyes led the Worcester attack with three goals each.

• Stephen Decatur’s varsity baseball team squandered a late lead against Washington High but rallied to win the game in the last inning in the regular season finale, 11-0. Senior Josh Hay’s bases loaded single in the bottom of the seventh inning won the game for the Seahawks.

Decatur led the game 9-5 at the start of the seventh inning, but Washington battled back and took a 10-9 lead after a couple of Seahawk defensive miscues. Decatur entered the bottom of the seventh finding itself trailing after leading the entire contest. Matt Pennington got the rally started with a lead-off walk, followed by a looping single by Terry Gallo. Senior Chris Chavis was then hit by a pitch to load the bases.

Senior Blair Donahue fouled off several pitches before drawing a walk to score Pennington with the tying run. With the bases still loaded, Hay hit a high chopper down the third base line that found its way into left field, easily scoring Gallo from third with the winning run, touching off a wild celebration at the plate. The win in the finale closed out the Decatur’s regular season with a 6-12 mark although the team played much better than its record indicated. Eight of the 12 losses were one-run losses.

• The Terps-on-the-Shore Golf Classic was played at the Deer Run Golf Club in Berlin. Event founder Ron Brooks served as co-chair of the event along with Maryland Head Football Coach Ron Vanderlinden. The growing event’s grand prize was raised this year to $10,000, more than double the prize in the prior year’s event.