• Decatur’s girls’ varsity lacrosse team held off a late rally by crosstown rival Worcester Prep to beat the Mallards, 14-10, and remain unbeaten on the season. Something had to give with unbeaten Decatur taking on Worcester Prep, which had lost just one on the season, and the game lived up to the usual hype surrounding the neighborhood rivalry.

The Seahawks got out to an early 3-0 lead, but the Mallards came back and cut the lead to 4-3. Decatur then reeled off six straight goals through the end of the first half and the beginning of the second half to build a 10-3 lead. The Seahawk scoring binge was led by Lexie VanKirk, Payton VanKirk, Elle Barger and Blair Yesko. 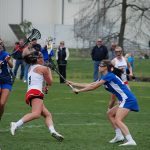 Worcester Prep’s Sophie Brennan moves the ball against the Decatur defense during the annual crosstown rivalry game this week five years ago.
Photo by Shawn Soper

Worcester then began a comeback attempt with about 15 minutes left in the game. Led by Sophie Brennan and Grace Tunis, the Mallards began to methodically chip away at the Decatur lead and got as close as 13-10 on a goal by Leigh Lingo with three minutes remaining. However, the Seahawks scored late and held on for the 14-10 win. With the win, Decatur inched closer to a perfect season and a Bayside South championship. Worcester dropped to 11-2 on the season with the loss.

• Decatur’s varsity baseball team celebrated Senior Day with a 12-2 win over Wicomico. The win over the Indians came just days after the Seahawks suffered their first loss of the season to Parkside. Decatur and Parkside had split their two regular season games and remained tied atop the conference standings with the season winding down.

Among the eight seniors recognized on Senior Day with special presentations were Connor Woodland, Brandon McKenzie, Justin Meekins, Brooks Holloway, Austin Dundore, Grant Donohue, Sean Colgan and Ryan Bennett. The core group of seniors came up through the Berlin Little League together and had great success at that level before reaching high school.

• Decatur’s boys’ varsity lacrosse team downed crosstown rival Worcester Prep, 11-4, behind an efficient offense and a stifling defense. Decatur led 3-1 after one quarter on a pair of goals by Jake Lathroum and another by Shane Moore. Worcester battled back on goals by Wyatt Richins and Sam Cantello, but Corey Gwin scored just before the half and the Seahawks led 6-4 at intermission.

With bragging rights on the line, the game was decidedly chippy with several big hits that brought the big bipartisan crowd to its feet. The 6-4 score at the half was as close as Worcester would get. Decatur scored five goals in the second half led by Jackson Mumford, Gwin and Steve Alther to pull away for the 11-4 win. Decatur goalie Will Hastings and the Seahawk defense shut down the Mallard offense and the Seahawks won most of the ground balls in the middle of the field to control the ball through the second half.

• Former Stephen Decatur and Snow Hill standout Ben Tate was drafted in the second round of the NFL draft by the Houston Texans. Tate, who began his high school career at Decatur before transferring to Snow Hill for his senior season, was expected to be third- or fourth-round pick after a standout career at Auburn, but the Texans grabbed him in the second round with the 58th pick overall. Tate finished his high school career with the then-state record 5,920 yards rushing.

• Stephen Decatur’s varsity baseball team enjoyed a big week with a pair of wins over county rival Pocomoke sandwiched around a win over Mardela. In the final game of a hectic week, the Seahawks beat 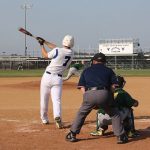 Decatur’s James Rossi delivers one of his three hits in a win over Mardela this week 10 years ago.
Photo by Shawn Soper

The win was the second of the week for the Mallards, who came from behind to beat Easton two days earlier. Butler led Worcester with four goals, while Harris and Ryan McGuire each scored twice.

• Within a span of four days this week, Worcester Prep’s girls’ varsity lacrosse team suffered its first loss of the season, then rebounded with a pair of all-important wins as the regular season wound down.

The Mallards started the week with a 15-5 loss to St. Andrew’s, which was the first loss of the season. Worcester wasted no time getting back on track, however, with a pair of big wins including a victory over old rival Saints Peter and Paul. The Mallards had lost to the Sabres at home earlier in the season, so this week’s matchup was critical for the Chesapeake Athletic Conference standings.

It turned out to be an offensive juggernaut with the Mallards coming out on top, 22-15. Worcester led, 12-4, at the half, but both teams came out firing in the second half. Liz Raskauskas led Worcester with seven goals and three assists. Keemia Khazeh scored four goals and dished out two assists, and Lacey Kenworthy scored two goals and handed out six assists. Worcester also got a lot of offensive output from Michelle Sawyer, Katherine Johnson, Natalie Shettle and Jamie Schneider.

With the win, the Mallards pulled even with Saints Peter and Paul atop the CAC standings with two games remaining. Two days later, Worcester Prep beat another CAC team in Gunston at home, 19-15, in another high-scoring game. The Mallards led 9-6 at the half and pulled away for the 19-15 win. Raskauskas scored four goals, while Sawyer and Shettle scored three each. Also contributing were Kenworthy, Ashlee Reed, and Johnson with two goals each.