•Worcester Prep’s boys’ varsity lacrosse team stayed on a roll this week, beating old rival Salisbury School, 16-1, on the road for their fourth straight win. The Mallards record now stands at 6-1 on the season after the win over the Dragons. Since its only loss of the season to D.C. power Bullis back on March 28, Worcester has now won four straight including wins over Salisbury School and St. Maria Goretti in the last week.

Against Salisbury School, just about everybody got involved in the 16-1 win. Wyatt Richins led the way with eight goals and three assists, while Patrick Petrara scored two goals. Sam Cantello scored a goal and dished out three assists, while Tucker Brown scored a goal and had an assist. Will Pedigo, Porter Bunting, and Ross Dickerson each scored single goals. Dickerson was dominating at time, grabbing 14 of 17 faceoffs and scooping up seven ground balls. Carter Hill and Jason Cook each had an assist, while Wade Walter and Jack Fager combined for five saves in the net for the Mallards.

The win over Salisbury School came on the heels of a 16-6 Mallard victory over St. Maria Goretti last week. Petrera led the attack in that win with five goals, while Cantello scored three times and dished out three assists. Brendan Miller also scored three times and had an assist, while Reid Carey scored two goals. Richins scored one goal, but dished out four assists, while Brown had a goal and three assists. Dickerson won 22 faceoffs and scooped up 13 ground balls. Wade Walter recorded 10 saves in the net.

•Stephen Decatur’s girls’ varsity lacrosse team continued to plow through the early part of its 2015 schedule with a resounding 19-0 win over North Caroline last Friday. The Seahawks are now 4-0 to start the season with wins over Saints Peter and Paul, Kent Island, Easton and now North Caroline. During the four-game streak, the Seahawks have outscored their opponents by a combined 64-11 and are averaging 16 goals per game while giving up less than three per game.

The Seahawks are now 3-1 after the first segment of their schedule, their only loss coming to Kent Island, 10-9, back on March 30. Decatur opened with an 8-4 win over Saints Peter and Paul and have now collected wins over Easton and North Caroline since the loss to the Buccaneers. 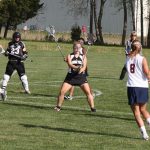 This week 10 years ago, Worcester Prep’s Molly Dickerson moved the ball on offense against Sussex Tech in a game won by the Mallards.
Photo by Shawn Soper

The Mallards got out to a big lead against Salisbury School on Monday and held on for what turned out to be a fairly tight game against the Dragons. Jackie Wangel scored three goals and dished out three assists in the win, while Tory Dickerson added two goals. The win extended Worcester’s lead in the ESIAC standings to two games.

The Mallards were back in action on Tuesday against Bennett and had a much easier time with the Clippers. The game started slow with neither team able to get much going on offense, but Worcester got it cranked up in the latter part of the first half and led 8-0 at the intermission and cruised to the 13-3 win. Mackenzie White led Worcester with four goals. Worcester goalkeeper Melanie Leiner, who was pitching a shutout until Bennett scored on a penalty shot halfway through the second half, finished with 12 saves.

•Decatur’s Paul Stortini tossed a five-inning no-hitter on the mound and Brian Hudson delivered all the runs his pitcher would need as the Seahawks blanked visiting Crisfield, 16-0, on Tuesday to improve 8-2 on the season.

It was already 12-0 in the second inning when Hudson stepped to the plate with the bases loaded. One swing of the bat later, Decatur led 16-0 as Hudson launched a bomb to right center to clear the bases. Hudson drove in seven runs all day including four on one big swing in the second.

Hudson’s big day at the plate came on a day when just one run would have done as Paul Stortini was nearly perfect on the mound. Stortini pitched a no-hitter and scattered a handful of walks in a five-inning game shortened by the slaughter rule. He also helped his own cause at the plate with a couple of hits. Decatur’s record now stands at 8-2 on the season including a 6-2 mark in the Bayside South.

•Stephen Decatur’s varsity softball team continued its dominance on Tuesday, routing visiting Crisfield, 19-0, in a slaughter rule-shortened game behind a combined no-hitter by two pitchers and plenty of offensive firepower at the plate.

Freshman Holly Melson started the game for Decatur and did not give up a hit through four innings. Another young Seahawk pitcher, Blakelyn Harrington, came on to close out the game and pitched a perfect fifth inning to complete the no-hitter for the Seahawks.

With the Decatur pitchers tossing a combined no-hitter, just one run would have been enough Tuesday against the Crabbers, but, just as they have done all year, the Seahawks pounded the opposition at the plate. Senior Ali Justice had three hits and drove in four runs, while Shelby Jones also collected three hits and drove in two. Kylie Nottingham also had a big day, going 2-3 at the plate and driving in three runs.

•Worcester Prep’s boys’ varsity lacrosse team routed conference rival Salisbury School, 15-2. After the game was relatively close through the first half, the Mallards used a big third quarter to pull away from the Dragons. Mike Heiderman led the offense with five goals, including three in the decisive third quarter. Trip Dyer and Tosh Tryon scored two goals each, while Andrew Lynch, Justin Roberts, David Schaeffer and Ben Bauer scored single goals. Goalie Chris Trumpower dominating in the net with 11 saves.