OCEAN PINES – A nationwide initiative to celebrate family during an uncertain time has been embraced by a local photographer.

Kim DeBoy of Indigomagik Photography is taking part in #TheFrontStepsProject, a campaign started by a Boston photographer who wanted to document families during the ongoing COVID-19 outbreak. Across the country, photographers — who don’t get within 10 feet of their subjects — are snapping photos of families on their front steps in exchange for donations to a nonprofit of their choice.

“It’s bringing the community together and supporting locally what your friends and neighbors need,” DeBoy said. 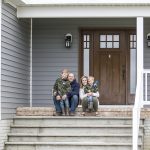 DeBoy, an Ocean Pines resident, learned about the photo campaign on the internet and decided to join in.

“It’s a project in these crazy times to find human connection,” she said.

DeBoy has enjoyed providing her fellow community members with an image of how they’re spending their days while much of society is shut down.

“I think it’s a cool, positive way to highlight how everybody’s spending their quarantine time,” she said.

While some people have opted to don their Sunday best for the family photo, others have decided to show their sense of humor, asking to be photographed in pajamas with laptops in hand.

“It breaks up the monotony,” DeBoy said. “It’s a neat way to give people something different to do.”

While some might be worried the project doesn’t fit in with social distancing efforts, DeBoy stressed that she’s not leaving her neighborhood and doesn’t get close to anyone. Interested families contact her through social media and then simply gather on their front steps as she takes a photo from the end of their driveway.

“I’m not crossing state lines,” she said. “I’m not asking people to leave their property or anything like that.” 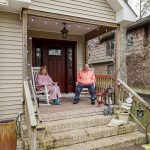 There’s no passing of cash either, as DeBoy has families use the online payment service Venmo to make a donation. She hasn’t yet decided which local nonprofit should receive the proceeds but is considering something that supports the medical profession or even those in the restaurant industry who now have no income.

“There’s hasn’t been a huge push around here,” she said. “I’m surprised, considering how much it spread with the hashtag on Instagram.”