• In an early battle of Bayside South powerhouses, Decatur’s varsity baseball team rallied late to defeat Parkside, 4-3. Decatur had its ace Grant Donahue on the mound against the Rams in an early-season test for both teams, but Donahue struggled early and gave up three runs in the second inning. The University of Virginia-bound starter eventually settled down and held the Rams right there while the Seahawk bats eventually got it going. Several college scouts were in attendance to watch Donahue, Decatur’s Justin Meekins and Parkside’s Hunter Parsons, all of whom went on to play in college.

Decatur scored twice in the fourth to cut the lead to 3-2 and went ahead in the dramatic top of the seventh inning to take a 4-3 lead. However, the drama was not over yet. Brandon McKensie took over on the mound for Decatur in the bottom of the seventh and quickly loaded the basis, putting the tying and winning runs in scoring position in the final frame. McKensie bore down and got the final out on a check swing-looking strike out to preserve the comeback win. With the win, Decatur improved to 4-0 on the season and knocked off Bayside South rival Parkside in an important early-season game.

Worcester then beat Saints Peter and Paul, 16-3, in an early clash between the old rivals. Brennan led the assault with five goals and two assists, while Soule added three goals and three assists.

• Stephen Decatur’s boys’ varsity lacrosse team fell to old rival Kent Island in a pulse-pounding 10-9 loss. Kent Island had always been a measuring stick for the Decatur boys program and had beaten the Seahawks three times in the previous year including the Bayside Conference championship game and the state regionals. Matt LeCompte, Corey Gwin and Jackson Mumford led Decatur to an early 3-1 lead, but Kent Island went on a late first half run to take a 4-3 lead into intermission. Late goals by LeCompte and Gwin gave the Seahawks an 8-7 lead with time running down, but Kent Island tied the game on an extra-man goal won it as time expired, 10-9, to continue their hex over th 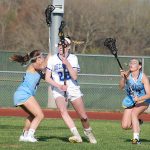 •While the Decatur boys fell to Kent Island this week, the Decatur girls’ varsity lacrosse team took care of business against the Buccaneers, 13-4. Payton VanKirk led the way with five goals, while Blair Yesko added three goals and two assists and Lexi VanKirk scored twice and dished out an assist.

•Stephen Decatur’s girls’ varsity lacrosse team also had their way with Cambridge-South Dorchester in a 25-0 rout. The Seahawks scored early and often on their way to the big early-season win. Leigh Anne Flounlacker led the Seahawk’s offensive outburst with six goals, while Bethany Howe scored four. Lexi Nathan and Lauren Holloway each scored three goals in the 25-0 win over the Vikings.

• Decatur’s varsity softball team edged Wicomico, 3-1, to remain unbeaten on the season. Maddie Justice was dominating on the mound, scattering four hits and allowing just one run while striking out 14. Justice has allowed just two runs in two starts as the Seahawks improved to 2-0. Kylie Nottingham sparked the Decatur offense with a two-run homer, while Abbie Schoor had a double, triple and drove in a run.

• Stephen Decatur’s girls’ varsity lacrosse team fell to heavily favored Kent Island, 15-7, this week. Decatur was just in its third season as a varsity program, while Kent Island was established as a powerhouse on the Eastern Shore. Decatur hung with the Kent Island early until the Buccaneers pulled away and took a 9-4 lead into halftime. Kent Island closed out the game in the second half and won 15-7. Theresa Penn led Decatur with four goals including three in the first half. Jessica King added two goals for the Seahawks, while Kristie Briddell added one.

“Despite the score, I feel happy with how we played today,” said Coach Lisa Fitzpatrick. “We’re improving every game with our fundamentals. We’re such a young team and a lot of the girls are still learning the game.”

• Decatur’s varsity softball team rolled past Wicomico, 11-4, to remain unbeaten. Jennifer Davis was dominating on the mound and helped her own cause, going two for two at the plate. Nadia Cortez drove in three runs and Tabitha Hays went 2-4 including a triple and three runs driven in. Lauren Butler also tripled for Decatur, which improved to 3-0 on the season.

•Decatur’s varsity baseball team fell to Wicomico at home and dropped to 2-4 on the season. Wes Maddy started on the mound for the Seahawks and was relieved after three innings by Brian Hazard. Blair Donahue hit a two-run homer and Josh Hay doubled and drove in a run. With the loss, Decatur fell to 2-4 on the season.